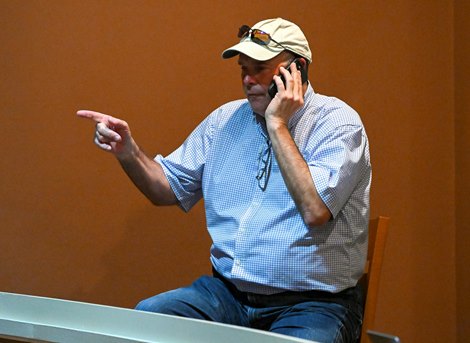 Perched on the second-floor balcony above the Fasig-Tipton sales ring for the July Selected Horses of All Ages Sale, bloodstock agent Steve Young watched as bidding on the stakes-placed 3-year-old Kuchar  soared past $200,000, $300,000, and $400,000. Then Young dove into the bidding, securing the $500,000 sales topper as the action neared a close.

“The only bid that matters is the last one,” he said.

Young was busy acquiring horses of racing age at the July 11 sale near Lexington, securing four, all for an undisclosed client who plans to bring the quartet to New York. The group was led by Kuchar (Hip 547), whose recent form made him popular with Young and numerous underbidders.

A son of Uncle Mo  , Kuchar entered Monday’s sale following four consecutive finishes in the exacta. He won a maiden race at Oaklawn Park, finished second there to Home Brew  in the Oaklawn Stakes, won a first-level allowance optional claimer at Churchill Downs, and then most recently ran second to graded 1 winner Rattle N Roll  in the July 2 American Derby there.

Overall, he is 2-2-1 in six starts, all on dirt, racing previously for owners WinStar Farm and Siena Farm and trainer Rodolphe Brisset. WinStar Racing consigned the colt.

“He’s an improving Uncle Mo,” Young said. “He’s got a proper pedigree. I thought his race against Rattle N Roll was very good. He’s never been on the grass. I think that is a viable option.”

Kuchar is her first black-type horse and her second winner. Four of her seven foals have started. The three unraced ones are ages 2 or younger.

“A lot of the right guys were on him. Steve Young is a good judge,” said Elliott Walden, president, CEO, and racing manager for WinStar Farm. “Today was gratifying to see.

“(Kuchar) ran super the other day, he’s a nice progressing horse, and I hope they have the best with him.”

Denali Stud, ELiTE, and Bluewater Sales were their respective consignors.

Like Kuchar, Diamond Hands was stakes-placed this year, having been second to 2021 Breeders’ Cup Juvenile Fillies Turf (G1) winner Pizza Bianca  in the Hilltop Stakes at Pimlico Race Course May 20. Most recently, she ran a close fifth in a first-level allowance optional claimer at Belmont Park June 16.

Diamond Hands in the ring

“(Diamond Hands) picked some tough horses to run against, but she’s lightly raced,” said Young. “I think she has a lot of blue sky in front of her if she’s brave and lucky.”

He noted he had been outbid on her when she sold for $425,000 to agent Joseph Migliore at the Ocala Breeders’ Sales Company’s 2021 Spring Sale of 2-Year-Olds in Training from the Scanlon Training & Sales consignment.

The $375,000 sales price did not surprise Young or Conrad Bandoroff, vice president of Denali Stud.

“The physical matched,” Bandoroff said. “She has a lot of ability, still has all her conditions, and she showed that she is a stakes-caliber filly. I think the quality of her physical combined with the upside of her racing potential helped her bring a premium here today.”

Montebello attracted Young’s interest with accomplished juvenile and 3-year-old form. He was an allowance winner of his last race at Belmont Park June 30.

“Nice horse, liked him as a 2-year-old,” he said. “He was good enough to win at Del Mar against open horses. He was dead game to win the other day in New York. The purses for New York breds—he has all his conditions. If he stays sound, we’re pretty good there.”