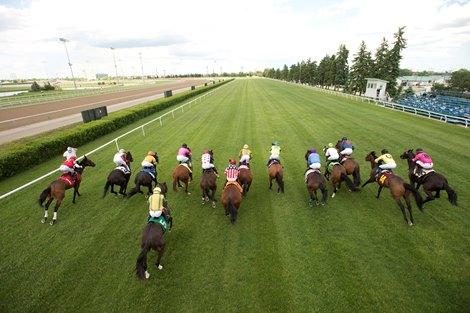 On Aug. 20, the day before the Queen’s Plate Stakes at Woodbine, horseplayers, both on-track and via simulcast and advance-deposit wagering, put more than $7.2 million through the betting windows on the Canadian product. That figure, while not in the same league as wagering numbers generated by leading U.S. tracks Saratoga Race Course and Del Mar, nevertheless was indicative of Woodbine’s growing attention in the North American betting marketplace.

Field size appears to be piquing the interest of horseplayers. An average of 9.1 horses went to post in the 10 races at Woodbine Saturday, ahead of a current meet average of 8.2 starters per race that Woodbine CEO Jim Lawson referenced in remarks during the post-position draw for the Queen’s Plate Aug. 17. By comparison, the U.S. average in July was 6.94 starters per race and at a pace of 7.19 starters per race for the first seven months of the year.

Even compared to past recent seasons at Woodbine, field size is up.

How has the Canadian track been able to buck the short-field trend?

Lawson, speaking Saturday with BloodHorse from the track’s new Stella Artois Terrace, credits the track’s racing office headed by racing secretary Scott Lane for writing conditions to some races that are “all-inclusive and giving people a chance to run.”

Other factors include a dry season that has allowed for a high volume of turf races over the track’s two courses. Woodbine also has a synthetic Tapeta track between its two grass courses. It does not have a dirt course for racing but does have a dirt training track on its backstretch.

“They do a good job maintaining the track surface,” said Kevin Attard, Woodbine’s second-leading trainer behind Mark Casse. “The Tapeta has been very good. I’ve been happy from a trainer’s perspective and point of view, that they’ve been able to maintain the horses, keeping them healthy and in sound form.”

Woodbine has also restricted its horsemen from shipping their lower-level horses to Fort Erie, the only other Thoroughbred track in Ontario, Lawson acknowledged.

Lawson said this practice is in keeping with similar restrictions imposed by U.S. tracks, which provide stalls to horsemen with the expectation of regular support of the local racing product.

“We expect you to race here, and the onus is on us to write lower-level races, which you’ll notice,” Lawson said.

One example is a maiden $15,000 claimer that was scheduled for turf on the Aug. 21 Queen’s Plate card—though the race ended up getting moved to the Tapeta course following overnight rain.

Though the use of diuretic Lasix is permitted at Woodbine, aside from in three Breeders’ Cup “Win and You’re In” races, Lawson said Woodbine hasn’t “seen a big trend” in horses being shipped for stakes specifically to run on the medication—though nearly all such competitors do run on it. All 11 runners in Sunday’s Queen’s Plate, the first leg of the OLG Canadian Triple Crown, race on Lasix.

Currently, many stakes, including the U.S. Triple Crown, and races for 2-year-olds are run without Lasix in some U.S. states. Lasix is used to control respiratory bleeding but is considered by critics to be performance enhancing.

Regulators that oversee racing at Woodbine are pro-Lasix, Lawson said.

Lawson indicated regulators and Woodbine are likely to continue to operate under rules that may differ from those in the U.S., though he hopes they can create as “much uniformity as we can” with the Horseracing Integrity and Safety Authority in the U.S.

“I expect we will carve our own path. We again, think of ourselves as leaders in innovation,” he said, pointing to restrictions on riding crop use that came to Woodbine before many tracks in the U.S. “I think you’re probably gonna see Category 1 interference rules here next year.”

Beyond rule modifications, bigger changes are on the horizon at Woodbine, where construction continues for a large hotel, amphitheater, and casino that will allow for expanded gaming. Woodbine would further like to add a train stop and 25,000 housing units on the 700-acre property, the largest undeveloped tract of land in any major city in Canada.

If the train stop gains the necessary go-ahead from the government and other officials, the track’s training track be moved to another portion of the property, which Lawson insists will happen. Woodbine plans to devote 200 acres of the property to horse racing.

“Hopefully we continue to have the facilities we do have to continue to train because I think it’s very healthy, and it benefits these horses because they don’t have to constantly go to the (main) racetrack and train every day,” said Attard, whose horses only need to take a short walk across one street to reach the current training track.

Attard is not a proponent of a shorter season, noting that many Woodbine horsemen race the majority of the year there, and call Toronto home.

Late-winter and early-spring training during periods of cold, inclement weather he feels is the reason for softness at the entry box in April more so than a long season.

Regarding Woodbine’s plans on its land, “Obviously, we’re excited to see what’s developing and what the plans are in store,” Attard said. “As long as horse racing is the center of it, I’m all for it.”