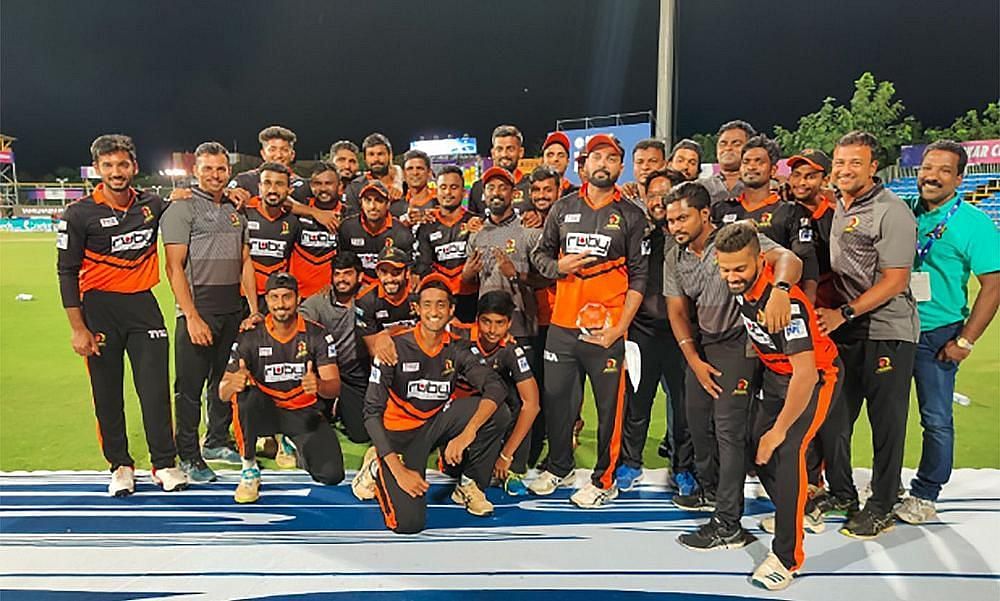 Ruby Trichy Warriors skipper Rahil Shah won the toss and opted to bowl first. The bowlers bowled well in the powerplay, restricting Nellai Royal Kings to 44/2. Baba Aparajith and Sanjay Yadav joined hands and started the recovery work. They both took time to settle in and once set, they started cutting loose.

Both played some sensational strokes as the Warriors’ bowlers had no answers to their onslaught. Their unbeaten partnership of 207 powered the Royal Kings to 236 at the end of their 20 overs. Aparajith remained unbeaten on 92 off 48 balls, while Yadav brought up his maiden century on the last ball to finish unbeaten on 103 off just 55 balls.

Want to collect some white Kookaburras? Just stand outside the SNR College Cricket Ground in Coimbatore. Baba Aparajith and Sanjay Yadav will do the needful for you. #TNPL2022

Want to collect some white Kookaburras? Just stand outside the SNR College Cricket Ground in Coimbatore. Baba Aparajith and Sanjay Yadav will do the needful for you. #TNPL2022

It was always going to be a daunting task to chase down this mammoth total. Ruby Trichy Warriors opener Murali Vijay went berserk as he hit some fantastic shots. His innings helped his side score 72 at the end of the powerplay but he lacked support from the other end. Other batters failed to adapt to the conditions as the Warriors kept losing wickets at regular intervals.

Vijay was the lone fighter for the Warriors as he smashed a magnificent century. However, the target proved to be too much in the end as they finished their innings on 170/7, losing the game by 66 runs.

K Easwaran and Baba Aparajith for the Royal Kings picked up two wickets each as they completed a comprehensive victory over the Warriors.

The Nellai Royal Kings retain their top spot in the TNPL 2022 points table. They extended their unbeaten streak to six by defending against the Warriors on Friday. Baba Aparajith and Sanjay Yadav put on a solid stand of 207 as it powered them to the highest total in TNPL history. They look favorites to win this year’s competition and will look to carry forward to continuing the winning momentum in the upcoming games.

The Ruby Trichy Warriors were outplayed by the Royal Kings. Their bowlers went on a journey and failed to hit the right mark throughout the innings. Murali Vijay scored a ton but it wasn’t enough as they fell short by 66 runs. They have been knocked out of the competition and will be eager to finish this year’s competition on a high.