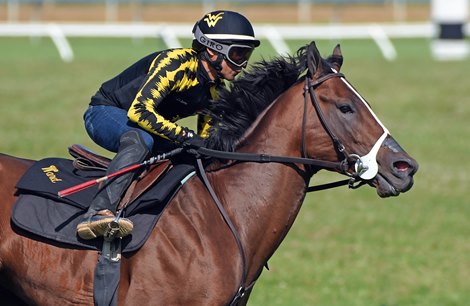 Now, he expects the son of Uncle Mo   to be special whenever he steps on the racetrack.

The next step on Golden Pal’s journey comes Aug. 5 when he runs in the $300,000 Troy Stakes Presented by Horse Racing Ireland (G3T) at Saratoga Race Course. Owned by Mrs. John Magnier, Michael Tabor, Derrick Smith, and Westerberg, Golden Pal will be a heavy favorite when he faces six others in the 5 1/2-furlong race on the Mellon turf course.

“He is already there,” Ward said, standing outside Golden Pal’s stall on the Spa backstretch, when the word great was being thrown around. “You just have to maintain greatness.”

Ward is eager to see his big horse run, especially after the last time he brought Golden Pal to the races. That was at the June 14 King’s Stand Stakes (G1) at Royal Ascot when he finished 16th as the 9-5 favorite.

It was only the second time in his 10-race career that Golden Pal failed to run well. The first also came across the pond when he was seventh in the Coolmore Wootton Bassett Nunthorpe Stakes (G1) at York last August.

The King’s Stand still gnaws at Ward, who wanted badly to showcase Golden Pal to the Brits.

“Absolutely, it was a crying shame,” he said. “I was so looking forward to that race in Ascot. I was so sick this horse did not have a chance to do it.”

Golden Pal’s race was over before it started. Jockey Irad Ortiz Jr., riding at Royal Ascot for the first time, was aboard Golden Pal in the starting gate and looked back at a horse that would not load.

Unbeknownst to Ortiz, the horse had been scratched and the gates opened and he wasn’t ready to go.

“All the other riders in England understand to be ready to go because the starter can start at any time,” Ward said. “Irad was thinking there was one horse back there that was going to be loaded, not realizing the starter scratched him. Irad was looking completely back and he nearly fell off. Essentially, the race was over.”

Golden Pal’s luck hasn’t been good overseas, but he has done everything right stateside. He has won all six of his starts on American turf, including two trips to the Breeders’ Cup. He won the Juvenile Turf Sprint (G2T) at Keeneland in 2020 and the Turf Sprint (G1T) at Del Mar last year.

Ward has said he is the best horse he has ever trained.

“This is it,” Ward said. “I have had some great ones, especially sprinters.”

Golden Pal has won five of five starts at the Troy’s distance and has also won both Saratoga career starts. Ward hopes for another trip to the Breeders’ Cup at Keeneland in November.

Among those trying Golden Pal in the Troy is R. Larry Johnson’s 8-year-old True Valour , who is coming off a third-place finish in the six-furlong Jaipur (G1T) at Belmont Park June 11.

“We had already decided (the Troy) was where we were going to go after his last race.” trainer Graham Motion said. “I didn’t really feel like going somewhere else just because Wesley is running. Obviously, his horse is very good. It’s not like I don’t respect him, but we are not going to change what we are doing. Our horse is in good form.”