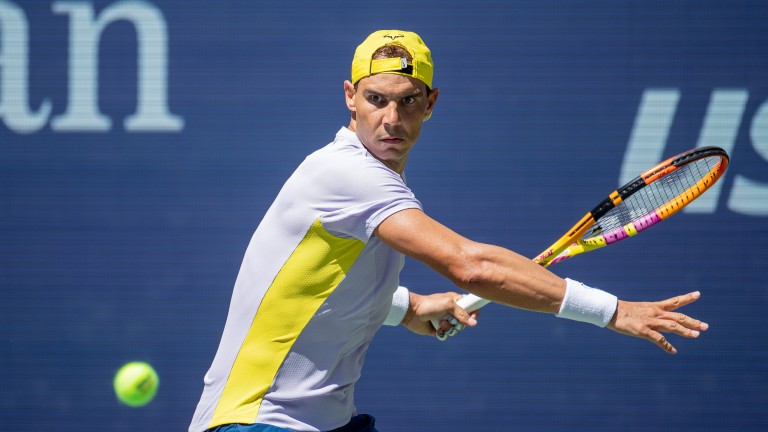 Tennis tips, best bets and preview for the US Open men’s singles, which starts at Flushing Meadows, New York City on Monday.

There is no Novak Djokovic at this year’s US Open but there is still plenty of quality on show in the men’s draw with Daniil Medvedev 13-5 to follow up last season’s success.

No player has successfully defended their Flushing Meadows crown since Roger Federer in 2008 but the Russian world number one is favourite to do so, despite a potential fourth-round clash with Wimbledon runner-up Nick Kyrgios.

That titanic tussle looks on the cards and Kyrgios had his measure in Canada earlier this month, so there are grounds to take Medvedev on, especially with 22-time Grand Slam champion Rafael Nadal still in the mix.

Nadal has yet to lose a match at a Grand Slam this year as he won titles in Australia and France before withdrawing through injury prior to his Wimbledon semi-final with Kyrgios.

Alexander Zverev is another notable absentee but Kyrgios’s resurgence and the presence of rising stars Carlos Alcaraz, Stefanos Tsitsipas and Jannik Sinner means there are still plenty of pretenders to Medvedev’s crown.

Write him off at your peril. Injury concerns meant Nadal was sent off at 8-1 for the Australian Open and 5-1 at his beloved Roland-Garros, but he triumphed on both occasions.

The legendary Spaniard then made the semi-finals of Wimbledon before being forced to withdraw, meaning he has won all 19 Grand Slam matches he has contested this year.

Throw in to the mix that he is the most decorated male player in history with 22 Grand Slam titles and it’s difficult to argue with the chances of Nadal, especially as he has repeatedly proven he can get himself ready for the headline events.

Nadal’s return to action after pulling out of Wimbledon saw him beaten in a deciding set by Borna Coric in the second round in Cincinnati.

However, that doesn’t look so bad now given Coric was crowned champion, beating Felix Auger-Aliassime, Cameron Norrie and Stefanos Tsitsipas en route to the title.

Even so, it was always going to be a pipe-opener for Nadal, whose ultimate aim is adding a fifth US Open title to his extensive trophy collection.

He last triumphed in New York in 2019, his last appearance at the New York Slam, so he will be determined to make up for lost time in the Big Apple.

It is also worth noting that 15 of the last 17 Grand Slams have been won by either Nadal or Djokovic, so with the Serb absent it is down to the Mallorcan to extend the pair’s dominance.

The draw has also been kind to Nadal with Diego Schwartzman seemingly his toughest test before a potential quarter-final against Norrie or Andrey Rublev.

That shouldn’t concern Nadal, who could meet younger compatriot Alcaraz or impressive Italian Sinner in the semi-finals, but his experience in high-pressure situations is invaluable and he’d be a firm favourite in any case.

The second seed beat hard-court specialist Medvedev in the Australian Open final in January and providing his body copes with the challenge then quotes of 4-1 look too big to ignore.

The second quarter looks the least competitive and that could see a big performance from Taylor Fritz, who looks decent value at 10-3 to make the semi-finals.

The big-serving American is progressing nicely and enjoyed the biggest win of his career this year when winning a Masters 1000 event in Indian Wells, defeating Nadal in the final.

Now is the time for Fritz to show he can do it in a Grand Slam but he did make the quarter-finals at Wimbledon, where he led Nadal two sets to one, and he will be spurred on by a passionate home crowd.

The fellow seeds in his section all have something to prove. Fourth seed Stefanos Tsitsipas has never gone beyond the third round at Flushing Meadows in five previous attempts, world number 13 Matteo Berrettini has skipped the last two Grand Slam events and has to prove his fitness, while French Open runner-up Casper Ruud is much more at home on clay.