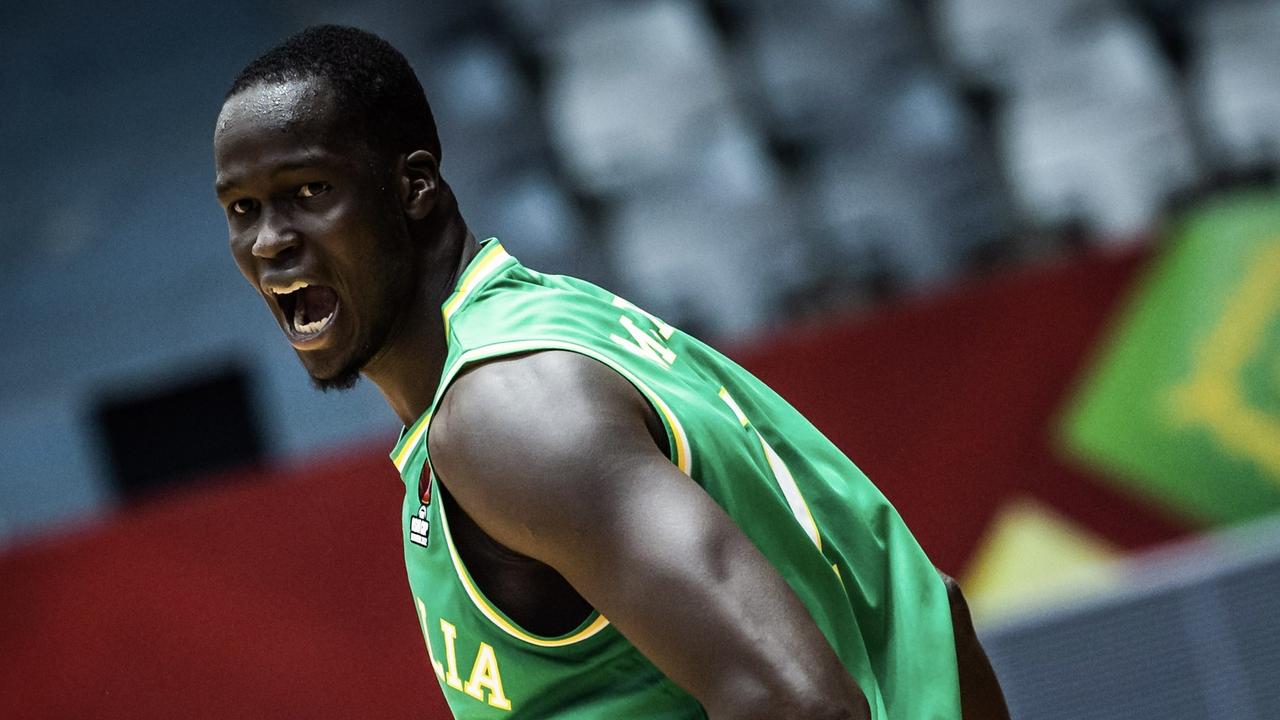 The Boomers were a cut above Jordan — and Thon Maker was a cut above everyone in a dominant performance in the FIBA Asia Cup that would have only enhanced his NBA hopes.

A dominant display from former NBA forward Thon Maker has helped the Boomers open their Asia Cup campaign in style with a comfortable 78-60 win over Jordan in Jakarta.

The ex-Milwaukee, Detroit and Cleveland star produced a powerful performance, dropping a game-high 23 points and adding eight rebounds, two assists and one block.

Maker’s brilliance is ominous for the rest of the teams in the Asia Cup. The former NBA big man means business and so do Australia as they look to claim consecutive Asia Cup gold medals after winning the tournament in 2017.

Here is what we learnt from the Boomers’ opening Asia Cup victory:

Maker has emerged as a real leader within the Boomers ranks and deserves another shot in the NBA. In fact, a strong performance at this year’s Asia Cup could help him secure a deal in the world’s best league.

Maker showed the way forward for a young Boomers side with his aggressive approach, especially in the opening quarter.

He went after the contest by attacking the rim, protecting the paint, and shooting from range.

Maker looks like he is relishing in his leadership role in a Boomers side without experienced stars like Matthew Dellavedova, Patty Mills and Joe Ingles.

The 25-year-old is clearly an NBA-calibre player, so hopefully a strong Asia Cup campaign can help him impressive franchises to earn a roster spot.

The Boomers’ future production line was on show against Jordan, with a cast of rising stars all proving that they belong on the big stage.

Melbourne United development player David Okwera was impressive for Australia, particularly in the first half.

Froling had 16 points and eight rebounds in a performance that reeked of class.

McDowell-White, who will play for the New Zealand Breakers in NBL23, stuffed the stat sheet with seven points, seven assists, four rebounds and two steals.

Future NBA draft prospect Tyrese Proctor struggled at stages, but persevered and will only get better with more game time.

The 18-year-old Sydney guard had four points and two assists in his 20 minutes on the floor.

There is no Brian Goorjian in the coach’s box, but it appears Australia’s defensive foundations won’t change under Asia Cup coach Mike Kelly.

The Boomers were dominant without the ball against Jordan, restricting their rivals to just 26 first-half points.

Australia also gave away just one foul in the first half – a testament to the team’s discipline.

On the offensive end, the Boomers looked calm and confident. The Australians had 16 assists in the first half, and despite a sluggish third quarter, they had enough strike power to surge to a comfortable win.

Four-time NBL champion Rhys Vague could loom as a go-to player from beyond the arc throughout the Asia Cup campaign.

The former Perth Wildcat who now plies his trade in Japan had eight points, including two of four from range.

5. Only Boomers can beat themselves

The Boomers dominated in the first half, but they dropped off in the third quarter to open the door for Jordan.

The Australians played sloppy hoops in the third, with too many turnovers, poor shooting options and lazy defence.

This allowed Jordan to reduce the Boomers’ lead to 15 points after restricting Australia to just eight points in the third quarter.

Australia is clearly a cut above the opposition at the Asia Cup, but they can’t afford to beat themselves with basic errors and poor attitude.

Originally published as Basketball 2022: All the latest news from the three Asia Cup qualifiers in Indonesia