The Bird with the Cricket-Like Song 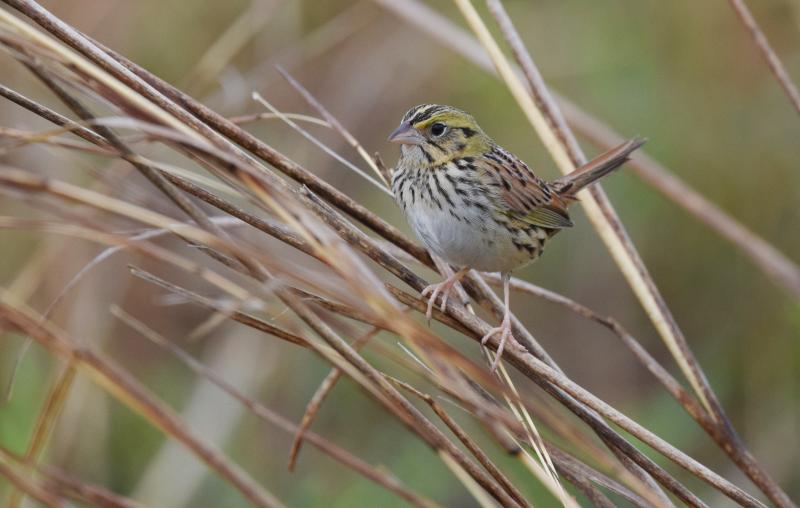 Imagine a sound vaguely like a cricket or grasshopper chirp. That is basically the essence of the song of a bird called the Henslow’s sparrow. Birders from Maine do not expect to hear the “ti-slick” of the Henslow’s sparrow in our own state. But that is precisely the sound that some well-tuned birder did hear emanating from a hayfield in Brunswick last week. Even more remarkably, a second singing individual has apparently been found at the same location this week with the first one still present!

Henslow’s sparrows are birds that breed in grasslands of the U.S. from New York and Pennsylvania west to Kansas and Oklahoma. They winter in the grass understory of pine savannas in the Gulf Coast states from Texas across to Florida and north to South Carolina.

For many years when we lived in Upstate New York we had a small breeding population in a grassland a few miles from where we lived in Ithaca. They were never easy to see, and they could sometimes be a little finicky about when they would sing, though, like most other birds, early mornings were always best. But Henslow’s sparrows have been on the decline for years, and our local population had disappeared before we moved back to Maine. Nonetheless, there remained lots of places around Upstate New York where the birds could be regularly seen and heard.

Sadly, this year, eBird shows only three locations where Henslow’s sparrows have been reported in all of New York State. This pattern of decline and eventual disappearance already had occurred in Massachusetts and Connecticut, both states where the species once nested, decades ago.

So the sighting of a Henslow’s sparrow in Maine has always been a wonderfully exciting event. There are a handful of records of the birds in the state, most from Monhegan during migration but a few from other scattered locations and dates. One memorable record for one of us (Jeff) was of a singing bird found with Peter Vickery at the former Brunswick Naval Air Station in July 1986.

Amazing that these singing Henslow’s sparrows have been found only a few miles from where that sighting occurred!

What brings these birds here is a mystery. Perhaps conditions back in their normal range are particularly hot and dry and they decided a sudden departure and large-scale movement to the northeast would yield them better conditions. Waterfowl sometimes make such resettlement movements when wetlands and ponds dry up in the places they normally nest. Sedge wrens sometimes show up further east in mid to late summer, presumably when conditions deteriorate in their normal breeding range.

We couldn’t help but take a swing through our favorite local grassland listening intently for the “ti-slick” of a wayward Henslow’s sparrow, just in case there are more out and about. We didn’t hear that wonderfully understated song but we will keep listening!

Jeffrey V. Wells, Ph.D., is a Fellow of the Cornell Lab of Ornithology and Vice President of Boreal Conservation for National Audubon. Dr. Wells is one of the nation’s leading bird experts and conservation biologists and author of the “Birder’s Conservation Handbook.” His grandfather, the late John Chase, was a columnist for the Boothbay Register for many years. Allison Childs Wells, formerly of the Cornell Lab of Ornithology, is a senior director at the Natural Resources Council of Maine, a nonprofit membership organization working statewide to protect the nature of Maine. Both are widely published natural history writers and are the authors of the popular books, “Maine’s Favorite Birds” (Tilbury House) and “Birds of Aruba, Bonaire, and Curaçao: A Site and Field Guide,” (Cornell University Press).