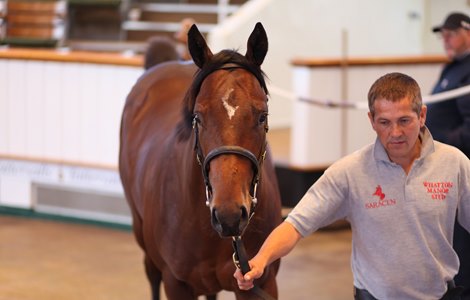 An outstanding catalog for Book 1 of the Tattersalls October Yearling Sale has been released, with full or half-siblings to 61 classic/group 1 winners and 223 group or listed scorers among 549 lots on offer.

The flagship sale has attracted yearlings by some of the world’s best sires, including Dubawi —26 cataloged, Frankel —28, Kingman —31, Lope de Vega —38, Sea The Stars —31, and Siyouni —26, while there are 17 by the much-missed Galileo.

Regally bred fillies include full or half sisters to the likes of Aclaim , Aunt Pearl , Battaash , Dreamloper , Ebro River , Galileo Gold , Line of Duty , The Gurkha , and Twilight Payment .

No fewer than 14 classic or group/grade 1-winning mares have progeny entered, including Nightime  and Sky Lantern  with colts by Dubawi and Kingman, respectively. Great Heavens  and Seventh Heaven  have fillies by Kingman cataloged, while 2018 Emirates Poule d’Essai des Pouliches (G1) heroine Teppal  has a colt by Invincible Spirit  on offer.

The late Galileo will be represented by a full brother to 2019 Arc winner Waldgeist, as well as full brothers to Hydrangea, The United States , and dual Guineas heroine Hermosa. He also has progeny selling out of top Australian racemare Missrock, dual group 1 winner Amazing Maria , and Investec Oaks (G1) runner-up Pink Dogwood .

Dubawi sits in poll position in the sires’ championship and has his usual outstanding crop of yearlings set to go under the hammer. They include a full brother to world champion Ghaiyyath  and colts out of classic or top-level-winning mares God Given , Main Edition , Persuasive , and Urban Fox .

Juddmonte’s reigning champion sire Frankel also has a number of exciting yearlings heading to Park Paddocks, including a colt out of group 3 winner So Mi Dar —a Dubawi sister to European champion Too Darn Hot —a three-parts brother to Grand Prix de Saint-Cloud (G1) winner Broome, and a full brother to St. James’s Palace (G1) victor Without Parole .

The exceptional catalogue for Book 1 of the #TattsOctober Yearling Sale is now online, featuring own or half brothers and sisters to more than 60 Classic and Group 1 winners.

Tattersalls chairman Edmond Mahony said: “Even by its customary lofty standards, the catalog for Book 1 of the 2022 Tattersalls October Yearling Sale looks to be exceptional. This year’s October Book 1 features own or half brothers and sisters to more than 60 classic and group 1 winners and more than a third of the 549 yearlings cataloged by current European top-ten sires.

“The consistent quality of October Book 1 is reflected in yet another outstanding year for Book 1 graduates on racecourses throughout the world, headed in Europe by classic winners Magical Lagoon and Native Trail and further afield by American grade 1 winners In Italian and McKulick.

“Every October Book 1 yearling will again be eligible for the hugely popular £20,000 October Book 1 Bonus Scheme, which has already rewarded 286 winners with almost £7,000,000 in bonus prize money and ensures that buyers at Europe’s premier yearling sale continue to be rewarded with unprecedented prize-money.”