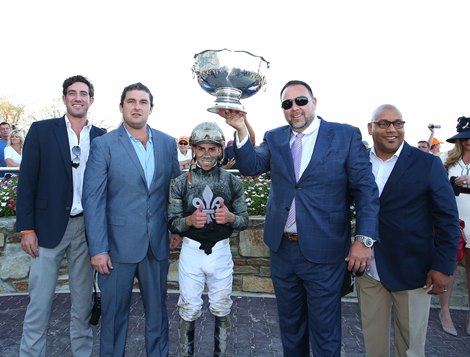 One of them is the risk-taker.

“Saffie tells me I have more guts than brains,” Fanelli said through a loud laugh.

That pretty much explains who is the gambler of the two.

As for Joseph, it’s his job to get the horses in shape and try to rein in Fanelli, whenever he can.

Neither one is aware of the exact percentage of times that Joseph says yeah or nay to one of Fanelli’s plans, but without question with two horses in particular they hit the lottery.

When you consider that Fanelli and Joseph took two horses bought for $22,000 and $25,000 and turned them into consistent graded stakes performers with combined earnings of nearly $2 million, while running them in some of the sport’s most famous races, that certainly rates as beating some rather staggering odds stacked against them.

“To have two horses, back-to-back, bought for small amounts of money and get two horses with earnings of around $1 million each, John is blessed,” Joseph said. “I wonder about some of the things he tells me, but a few have been a huge success.”

The first bonanza was Math Wizard . The son of Algorithms  was claimed as a 3-year-old on Jan. 31, 2019, for $25,000 by Joseph and Fanelli two starts after running third in the sport’s most famous maiden claimer, the Dec. 20, 2018, race at Gulfstream Park won by multiple grade 1 winner and 3-year-old champion Maximum Security  . Math Wizard won by 18 1/2 lengths that day and went on to win the $1 million Pennsylvania Derby (G1) and run in races such as the Longines Breeders’ Cup Classic (G1), Pegasus World Cup Invitational Stakes (G1), and Woodward Handicap (G1). He earned $1,183,840 before Fanelli said he sold him to St. George Stable, which owns the champion mare Letruska .

Later in 2019, Ny Traffic  came along. Fanelli, with some help from trainer Harold Wyner, bought him for $22,000 after he failed to reach his reserve of $27,000 at the Fasig-Tipton Midlantic 2-Year-Olds in Training Sale.

“That’s my hometown sale,” said Fanelli, a New Jersey resident who is the general manager of the Nissan of Turnersville car dealership. “I love to get horses that do not reach their reserve figure.”

Ny Traffic, a son of Cross Traffic   bred in New York by Brian Culnan out of the Graeme Hall mare Mamie Reilly, started his career with Wyner, another of the six trainers Fanelli uses for the roughly 25 horses he owns. The gray colt won one of his first four starts in New York and Pennsylvania before Fanelli bought out his partner, Leonard Liberto, and sent the horse to Joseph in Florida.

After a victory by nearly seven lengths in a Jan. 11, 2020, allowance optional claimer at Gulfstream Park, Ny Traffic was on his way to a career as a stakes winner for Joseph with earnings of $873,340. While a graded stakes victory has eluded him, he missed grade 1 honors by a slim nose when he lost by inches to eventual 2020 Horse of the Year Authentic   in the TVG.com Haskell Stakes (G1). At Fanelli’s urging and with Joseph’s consent, Ny Traffic has faced some of the best runners of his generation in races such as the Kentucky Derby Presented by Woodford Reserve (G1), Preakness Stakes (G1), Twinspires.com Louisiana Derby (G2), and WinStar Gulfstream Park Mile Stakes (G2).

“My theory is you can’t win if you’re not in it,” said Fanelli, who now owns Ny Traffic in a partnership that has grown to include Cash is King, LC Racing, Paul Braverman, and Team Hanley. “Some guys avoid races, we won’t.”

Fanelli’s willingness to take a chance where others opt for discretion will come into play once more July 30 when Ny Traffic will be the top challenger among five rivals for 2021 champion sprinter Jackie’s Warrior  in the six-furlong $350,000 Alfred G. Vanderbilt Handicap (G1) at Saratoga Race Course.

Given how the New York Racing Association has struggled to get more than four or five starters in some of its graded stakes, the decision to take on a behemoth such as Jackie’s Warrior, the 1-5 morning-line favorite, is one with an upside that also makes life easier for a racing office and cards more enjoyable for fans.

“There are so many horses trying to duck each other that it hurts the sport. You’re getting four-horse fields and it’s not good for the gamblers or the handle. It’s a trickle-down effect,” Joseph said. “Sometimes people worry more about their winning percentages than being a sportsman and taking a chance. We need stars like Jackie’s Warrior, but we also need big fields. Sometimes we have to consider what’s best for the sport.”

Facing Kirk and Judy Robison’s Jackie’s Warrior (Maclean’s Music  ), a winner of 11 of 15 career starts with four grade 1 victories for trainer Steve Asmussen who stands as the lone grade 1 winner in Saturday’s field of six, actually fits into Fanelli’s philosophy.

“I’m never scared of one really good horse. I will be scared of three really good horses. Never just one,” Fanelli said. “We figure we have a shot in a small field. Jackie’s Warrior could falter. I’ve had it happen to my horses. Not many horses and trainers never lose.”

Joseph looks at the Vanderbilt from what he calls a realistic view. He knows the chances of beating Jackie’s Warrior are slim, but, in a race with about $70,000 in purse money for the runner-up, after Ny Traffic’s recent sprint stakes wins in the Affirmed Success for New York-breds and the Chocolate Town at Penn National, he believes there’s value in taking a shot that an alarmingly growing number of owners and trainers will not.

“Jackie’s Warrior is a champion sprinter and one of the best in recent times. It’s his race to win or lose. On paper, I don’t think we can beat him, but we see horses like that get beat,” Joseph said. “We’re going to try to beat him. Will we beat him? Realistically, no. But racing gives you hope.”

“Horses have become my passion. I love being around them. I get excited for a $5,000 claimer,” Fanelli said. “Even though Ny Traffic had a brutal trip and came back without a shoe in the Kentucky Derby (when he was 8th) and he went to his knees at the start of the Preakness (9th), they can never take the memory or the experience of those races away from me.”

Fanelli’s experience in selling cars has also served him well in bringing in partners and reaping some of the value his two stakes winners have accrued. With Math Wizard, he was originally approached by partners who wanted all of the horse or required moving the horse from Joseph. That was a deal breaker.

“I can’t say enough good things about Saffie. He’s brilliant. He knows everything about every horse. He’s super attentive,” Fanelli said. “We are both similar in that we are both perfectionists. That makes us work together well.”

So, through Joseph, Fanelli enlisted his own partners and Collarmele Vitelli Stables, Bassett Stables, Ioannis Zoumas, Wynwood Thoroughbreds, and Joseph joined the ownership group by the time Math Wizard ran fourth in the Wood Memorial Stakes Presented by NYRA Bets (G2). After the breakthrough win in the Pennsylvania Derby, Khalid Mishref, Cash is King, and LC Racing bought in and Joseph and Wynwood cashed out.

“This has been such a great experience,” said Fanelli, who grew up in Philadelphia. “I started going to the races when I was 8 and my father would sneak me in. I always loved it. I was a professional poker player and I decided to get into ownership. In 2008, I bought two horses for 5,000 and they ran on the same day. One won and was claimed for a higher price and the other was second or third. I made $25,000 in my first day as an owner and I thought I was the smartest guy in the business. Then I didn’t win another race for a year and that’s when I got the education in the sport that’s helping me now.”

Based mostly at Gulfstream Park, the 35-year-old Joseph was the youngest trainer (age 22) to win the Barbados Triple Crown and the third-generation horseman started training in the United States in 2011. Thanks to the boost in attention from Math Wizard and Ny Traffic, his wins have skyrocketed from just 19 in 2016 to 95 in 2019 and then 128 in 2020 and 201 last year.

“Math Wizard was my first grade 1 winner and he took me all over,” said Joseph, who won the Curlin Florida Derby Presented by Hill ‘n’ Dale Farms at Xalapa (G1) with White Abarrio  earlier this year. “I will always be grateful for having him and he kick-started my career.”

He’s also appreciative of the support he’s received from Fanelli.

As anyone who has watched the careers of Math Wizard and Ny Traffic would whole-heartedly agree.