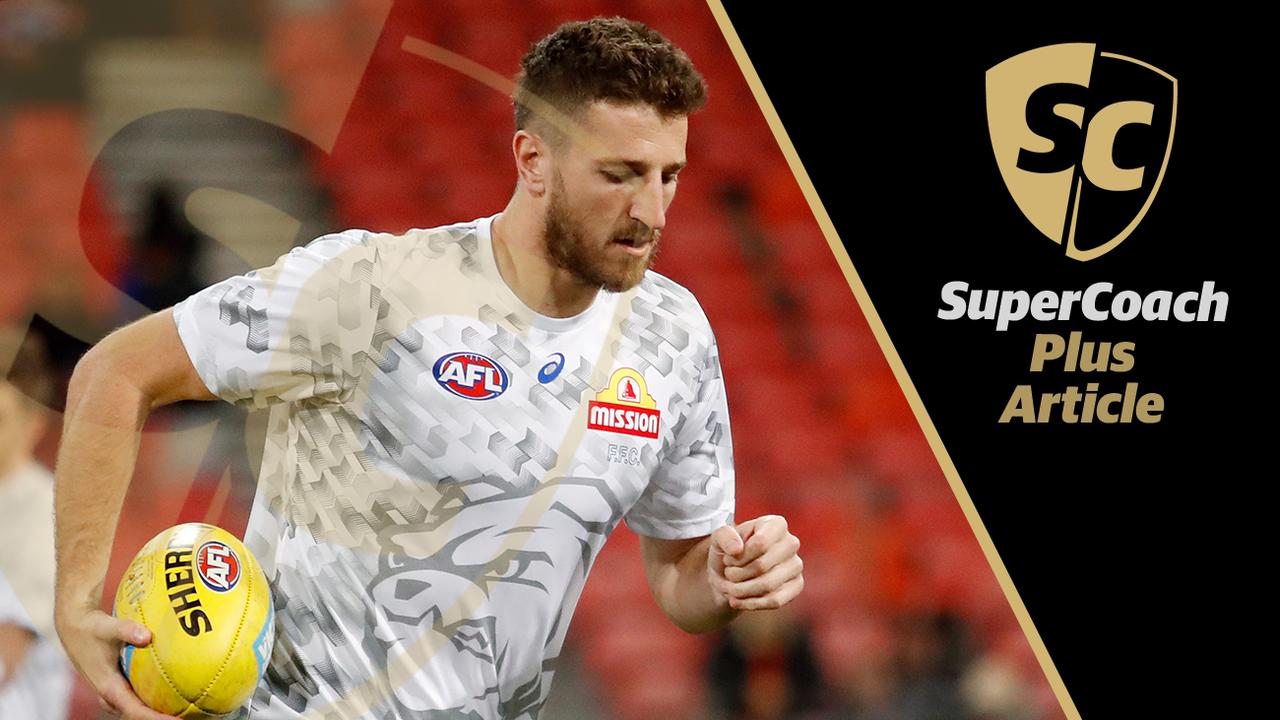 It’s never too early to start KFC SuperCoach planning. Who will be DPP in 2023? Which bargains should we target? Here are 11 nuggets from SuperCoach Plus.

With six rounds to go, the finish line is in sight for KFC SuperCoach 2022.

Overall rankings and league finals are on the line, but some savvy SuperCoaches are already looking ahead to next year.

What did we learn from this year that can make our teams better? What will be the winning strategy in 2023? Which players should we be putting on our watch lists already?

Scroll down for the answers in this SuperCoach Plus special. And bookmark this page so you can find it again in January!

SuperCoach Plus is a treasure trove of stats and tools to help you get the most out of your KFC SuperCoach squad, from the new trade assist button to Break Evens, score and price projections, live trade and captaincy data and lots more.

And this year SuperCoach Plus subscribers can see live scores for every player in every home-and-away match.

1. Will mid-pricers ever be this successful again?

This has truly been a year out of the box with so many mid-price selections proving to be keepers. George Hewett is the prime example after starting at $399k, but Stephen Coniglio, James Sicily and Will Brodie – who was really an elevated-priced rookie – have been among the best picks of 2023. The fact these players are scoring at a premium level has helped coaches “finish” their teams quicker than ever. Will it happen again, though? History suggests no. But then history suggested Hewett couldn’t average more than 90 and he has regularly pumped out triple-figure scores this season. The most likely event next year will be that the usual one or two mid-price gems jump out and a few others appear during the season based on a role change or injury – think Darcy Cameron this season. Reverting to the proven guns-and-rookies approach might be the way to go, but as always that will depend on the right cheapies being available. No one envisaged having to pay over $200k for Jake Bowey or Heath Chapman to fill out their defences this year.

2. How many premium defenders will we have to pick?

Midfield has always been where KFC SuperCoaches use the bulk of their money but that might be about to change. If you want Tom Stewart, Jordan Dawson, Jack Sinclair and Sicily in your starting team next year, be prepared to pay up. Last year there wasn’t a defender who averaged more than 108 (Jake Lloyd). There are 14 averaging more than 100 after round 17 and six averaging 110 points or more. Filling your defence next year is going to be costly and choosing correctly won’t be easy. All four of Stewart, Dawson, Sinclair and Sicily have been incredibly consistent, so it’s not like you can bank on getting them cheaply at some stage during the season.

3. Can we trust Tim English?

Sorry to answer a question with a question, but surely he can’t encounter as much misfortune next year as he has in 2022. Hamstring injury at training, illness and a Braydon Preuss tackle causing concussion have left English’s KFC SuperCoach owners frustrated this year. He will be front of mind for many KFC SuperCoaches when planning their ruck line for 2023, although it’s worth noting he’s never played 20 games in a season – and can only feature in a maximum of 15 this year. It’s still up in the air if we can trust English’s body, but at least his scoring potential is unquestionable. Next year’s ruck selection might simply come down to the price difference between him, Gawn and Grundy.

4. Which fallen premiums will we be talking about?

Jake Lloyd. Patrick Dangerfield. Jarryd Lyons. Tom Mitchell. And, no doubt, Dustin Martin. All have been KFC SuperCoach heroes in previous years but due to form, injury and other issues this year haven’t hit their previous heights. Dangerfield in the twilight of his career might seem crazy to suggest, but what if he’s under 500k? Ditto Lloyd, who has lost his mantle as the must-have defensive distributor. Coming off an average of 103, Brodie Grundy might even fit into this category. Matt Crouch and Jordan De Goey will be tempting if they move clubs and Lachie Whitfield will be dirt cheap. Actually, forget we said that.

5. Has the pecking order changed in midfield?

Jack Macrae has long been the first-picked for most KFC SuperCoach teams, but three of the competition’s other elite onballers have gone past him this season – Lachie Neale, Clayton Oliver and Rory Laird. Callum Mills and Touk Miller aren’t far behind either based on averages. Macrae is still one of the first midfielders to consider next year, but the field is as crowded as it has ever been. If you had to decide now, Oliver would be first-picked ahead of Neale.

6. Should we hold Trade Boosts for longer?

Yes. It’s that simple. Many KFC SuperCoaches burned their five trade boosts before the byes and could only watch on as others used theirs strategically to make four trades and bolster their sides – especially for the round 13 bye when the first group of trade targets came off their round 12 rest. Upgrading your team quickly would no doubt have been satisfying, but for many it has come at a cost during the run home. In a perfect scenario, KFC SuperCoaches would use 2-3 boosts before the byes, one in the middle bye round and save one for a disaster later in the season. Next year will no doubt present more unique challenges, but if there’s one thing you take from 2022 it should be not to use your Trade Boosts too aggressively. Even if it means losing ground in the first half of the season, you’ll make that up quickly when others run out early.

7. What happened to set and forget? Is it really dead?

Remember when picking Max Gawn and Brodie Grundy was the safe, boring option in the ruck? They have played 20 of a possible 32 games, and they aren’t unique among ruckmen. Just four of the top 10 averaging rucks have played every match and one of them, Toby Nankervis, is set for multiple weeks out with a PCL injury. We don’t have the space to list all the injured rucks but it’s safe to say it’s been a nightmare. Surely we can’t get that unlucky again, although picking dual-position players to provide cover is definitely a smart strategy. As for an early punt on who will be the topscoring/best value rucks in 2023, that’s going to be very tricky. Grundy will be cheap but how does he fit with revelation Darcy Cameron? And Luke Jackson is only going to take more of Gawn’s ruck minutes. Jarrod Witts is reliable but won’t present the same value as 2022 while Sean Darcy has remarkably escaped most of the injury carnage. If Rory Lobb and/or Lloyd Meek move clubs he will be one-out in the ruck for the Dockers – and Meek will definitely be worth considering if he gets a top ruck job somewhere. Rowan Marshall will be top of the list if Paddy Ryder retires, and there’s one thing we do know for sure – don’t pick Braydon Preuss.

8. How important are DPP changes?

One of the great new features of KFC SuperCoach in 2022 has been the introduction of position changes at regular intervals during the season. This year 49 players gained DPP status before round 6, another 23 before round 12 and 10 more this week. Most of the relevant changes were in the first round including key rookies once it became clear where on the field they were spending most of their game time. But round 12 was also a key date with premiums including Marcus Bontempelli gaining forward status. Heading into next year it might allow us to be a little less worried about ensuring we have DPP rookies on the bench in our starting squads – some are bound to arrive after round 5 – and to be cautious about filling a defence or midfield until after at least the second round of changes.

Marshall should be a RUC/FWD in 2023 unless Paddy Ryder misses multiple games, and Crows scoring machine Jordan Dawson is likely to be a DEF/MID, along with Jayden Short. Port Adelaide pair Zak Butters and Connor Rozee should be MID/FWD again next year and Nick Daicos is likely to retain DEF/MID if you want to back him in for a second-year breakout (and why not). Based on current numbers we will be able to pick Josh Dunkley and Bailey Smith as MID/FWDs, but Dogs Marcus Bontempelli, Tom Liberatore and Tim English are set to lose DPP status. So are George Hewett, Luke Parker, Jack Crisp, Dan Houston, Will Brodie and Patrick McCartin. You can add Jack Sinclair to that list, but we should still be able to pick him in defence. Expect Isaac Heeney to return to being a FWD only – where are those midfield minutes, Horse?! – but swingman Harry Himmelberg should retain DPP after his move back late in the year.

Jack Ziebell felt like a bolt from the blue when he started the 2021 season priced under $260 and went on to average over 100. Then Coniglio ($261k) and Brodie ($224k) repeated the feat. Can lightning strike a third time in 2023? Ben King and Nick Coffield will get a maximum price discount after missing the entire season with injury, but neither are noted KFC SuperCoach scorers. Paul Seedsman averaged 95.8 last year but his future is uncertain, while Josh Bruce could return this week and he only averaged 66.9 last year anyway. Rory Sloane, Hunter Clark and Jacob Hopper have played only a handful of games and will be severely underpriced, while injury-cursed veterans Orazio Fantasia, Mitch McGovern and Dan Hannebery won’t cost much more than a top-end rookie. Dom Sheed is another name to watch. He will finish the year with just one game to his name, when he scored 67 KFC SuperCoach points in round 14 after returning from syndesmosis only to suffer another season-ending leg injury. He averaged 95 in 2019 and 80-plus the next two seasons.

It’s hard to imagine any first-year player repeating Daicos’s heroics, although his yearly average of 88.6 only just edges out Sam Walsh’s 86.9 in his debut season (2019), so high draft picks can deliver in year one. Ashcroft is the hottest draft commodity right now and has all the hallmarks of an elite KFC SuperCoach scorer. The son of Brisbane premiership star Marcus Ashcroft (who is yet to decide if he will join the Lions as a father-son pick) scored 152 for Vic Metro against WA last week after blowing up the stats sheet in the NAB League – in a game against the Western Jets last month he registered a whopping 51 disposals (27 contested), 14 clearances, seven score involvements, six tackles and 205 KFC SuperCoach points. Daicos averaged 159 in five NAB League appearances last year. This year Ashcroft is averaging 156 from seven games. He won’t come cheap but it will be a huge risk to start without him. Meanwhile, other rookies already on club lists who could be smart buys in 2023 include injured pair Campbell Chesser and Will Phillips, plus Port Adelaide’s Josh Sinn, Gold Coast’s Elijah Hollands, Magpie Charlie Dean and Phantom favourite Will Gould.

Originally published as SuperCoach Plus: 11 things you need to know to plan your 2023 team