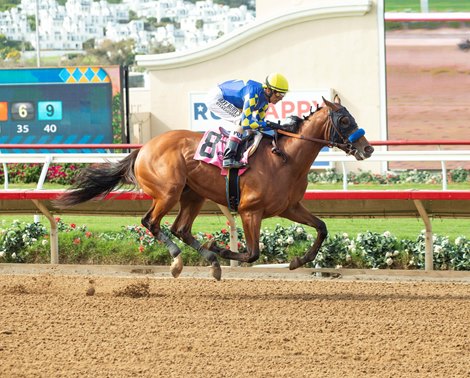 This column highlights the performances of maidens who have made no more than five starts and who either sold for more than $500,000 at public auction, have siblings that are grade/group winners, or have dams that are grade/group winners. BloodHorse research shows maiden winners in particular who meet these criteria are more likely to go on to be graded stakes winners.

SF Bloodstock, Starlight Racing, and Madaket Stables partnered up to buy Newgate  for $850,000 from the Taylor Made Sales Agency consignment to the Keeneland September Yearling Sale last year and the Into Mischief   colt powered home to win his July 30 debut at Del Mar.

Campaigned by the partners in conjunction with several other investors, Newgate is the latest Bob Baffert trainee to hit the track. The 2-year-old colt took a 5 1/2-furlong maiden special weight that lured a field of 11 but was scratched down to 9 by the start.

Ridden by John Velazquez, Newgate was bumped at the start and raced in second as Hard to Figure  set early fractions of :21.78 and :44.90 through a half-mile. In upper stretch, Newgate took over and was soon clear of Hard to Figure. He drew away under hand urging to win by 3 1/2 lengths in a final time of 1:03.89 on a fast track.

Bred by Town and Country Horse Farms, Newgate is out of the graded stakes-placed Majestic Warrior  mare Majestic Presence. With four timed works in July, the colt posted two bullet breezes while at Santa Anita Park, drilling five furlongs in a minute flat July 10 to be the fastest of 70 working the distance, and July 17 he got the same distance in :59 1/5 to be the fastest of 44 that day.

On Sunday, CRK Stable’s Justique  put in a strong rally from the back of the 10-horse field to score a 2 1/2-length victory in her debut. The Justify   filly trained by John Shirreffs is a half sister to Hollywood Derby (G1T) winner Mo Town  .

Ridden by Victor Espinoza, Justique was slow out of the gate and last as a quarter-mile went in :21.44. She had moved into eighth after three furlongs and surged by the leaders under a hand ride after Espinoza had lost the whip. She completed the 5 1/2 furlongs in 1:04.29 on a fast track.

Bred by John D. Gunther and Eurowest Bloodstock, Justique is out of the Bernardini  mare Grazie Mille.

StarLadies Racing, LNJ Foxwoods, and Gainseway Stable’s Prank  blew her competition out of the water July 31 when she captured her debut by 9 3/4 lengths in a 5 1/2-furlong maiden test for 2-year-old fillies. The Into Mischief   filly, a half sister to Belmont Stakes Presented by NYRA Bets (G1) winner Mo Donegal , is trained by Todd Pletcher.

Prank was turned loose from the gate with Irad Ortiz Jr. aboard and went straight to the lead, posting fractions of :21.91, :45.11, and :57.12 through five furlongs while pulling away to a seven-length lead, which only widened down the stretch. She stopped the clock in 1:03.94 on the fast track.

Bred by Ashview Farm and Colts Neck Stables, Prank is the third foal to race out of the Pulpit mare Callingmissbrown, who now has three winners from three starters.

Capture the Flag wins his debut at Saratoga Race Course

A day prior, Capture the Flag  won his debut at the same distance. The Quality Road   colt trained by Shug McGaughey outran his rivals to win by three lengths.

The colt, bred by Joseph Allen, is owned by a partnership that includes Allen Stable, the Coolmore connections of Susan Magnier, Michael Tabor, and Derrick Smith, as well as Westerberg Limited and Jonathan Poulin. He is out of the grade 1-winning War Front   mare War Flag.

Racing July 30 at Gulfstream Park, X Y Point  shot out of the gate and never looked back to land his debut by 6 1/2 lengths. The 2-year-old Dialed In   colt, trained by Saffie Joseph Jr. is a half brother to 2017 Rebel Stakes (G2) winner Malagacy.

Bred by Don Robinson and Allen Schubert, X Y Point is out of the Dehere mare Classiest Gem.