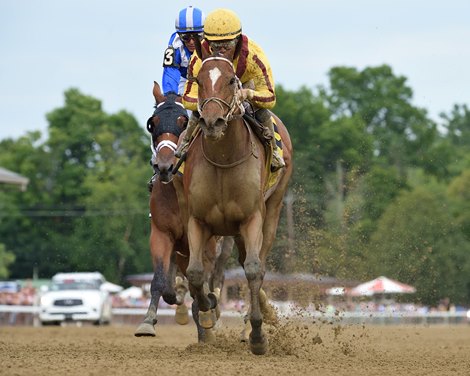 The numbers crunch for starters in dirt stakes at Saratoga Race Course claimed a victim when the $135,000 Shine Again Stakes drew just one entrant was not carded as scheduled Aug. 3. The race was offered as an “extra” for racing Aug. 4 and again did make the racing program.

The Shine Again was scheduled for seven furlongs dirt race for older fillies and mares which had not won a stakes in 2022 other than a state-bred test.

There were originally two probable starters for the Shine Again, but one of them opted for an allowance race, leaving just one hopeful starter.

The failure to fill the entry box for the Shine Again comes at a time when it has been a challenge for the New York Racing Association to put together large fields for its dirt stakes.

Three of those stakes, each graded, had just four starters. Elite horses in some of the races likely contributed to the limited field size.