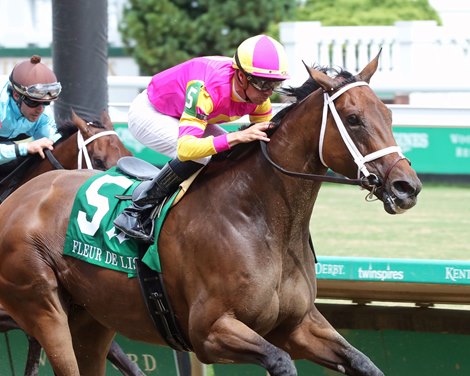 Winning Del Mar‘s Clement L. Hirsch Stakes (G1) more than once has been an excellent barometer of championship-caliber runners, something to keep in mind if Shedaresthedevil  can repeat her 2021 Hirsch victory Aug. 6.

Those three horses were based in Southern California with trainers Laura De Seroux, John Shirreffs, and John Sadler, respectively. Shedaresthedevil could accomplish something none of those three have—win as a shipper.

Shedaresthedevil began her career in California at 2 under the tutelage of Simon Callaghan. However, since her 3-year-old season, Brad Cox has trained the daughter of Daredevil   from his Kentucky base. As Cox did last year, he will ship her in for the Hirsch, a 1 1/16-mile event for females 3-years-old and older that also awards a “Win & You’re In” berth to the Longines Breeders’ Cup Distaff (G1).

“She loves it here at Churchill Downs, and Florent (Geroux) gave her a perfect ride,” said Cox after the Fleur de Lis.

In a bit of serendipity, Geroux is spending the summer at Del Mar and has ridden two winners through Aug. 3. He will be back aboard Shedaresthedevil, who drew post 5 in the field of seven.

Shedaresthedevil will face an entirely new batch of Southern California runners in this edition of the Hirsch. The newcomers are fellow 5-year-olds Samurai Charm  and Blue Stripe ; 4-year-olds Private Mission , Soothsay , and Lisette ; and 3-year-old Desert Dawn .

No 3-year-old has ever won the Hirsch, though Zazu  came within a neck of doing so in 2011, when Ultra Blend  won.

Desert Dawn brings hefty credentials. She is trained by Phil D’Amato, the Santa Anita leading trainer who has taken an early lead at Del Mar. A daughter of the Tapit   stallion Cupid   out of the Honour and Glory  mare Ashley’s Glory , Desert Dawn won this year’s Santa Anita Oaks (G2). Since that effort, she finished third in the Longines Kentucky Oaks (G1) and Summertime Oaks (G2), stumbling badly at the start of the latter.

The mother-and-daughter team of Elena and Hollie Crim bred Desert Dawn in Arizona in the name of their H & E Ranch, and they also race her.

Desert Dawn drew post 3, and Umberto Rispoli, her jockey throughout 2022, will again ride.

The Hirsch has attracted two Santa Anita Oaks winners. Soothsay won the race in 2021, followed by a second in the Summertime Oaks and a win in the Indiana Oaks (G3). An injury sidelined Soothsay, who hasn’t started since the Indiana Oaks. Richard Mandella trains the Kentucky-bred daughter of Distorted Humor . Mike Smith will ride the filly for the first time, and she drew the rail.

Blue Stripe finished second in the Santa Maria and returns in the Hirsch in Post 7 for trainer Marcelo Polanco, who named Hector Berrios to ride. A daughter of Equal Stripes , Blue Stripe won the April 30 Santa Margarita Stakes (G2) in her second U.S. start and was a group 1 winner in her native Argentina.

Samurai Charm (Ramon Vazquez, post 6), owned and bred by J. Kirk and Judy Robison, who also campaign champion male sprinter Jackie’s Warrior , comes into the Hirsch off a second in the Great Lady M. Stakes (G2) at Los Alamitos. The Kentucky-bred daughter of First Samurai   was four-for-five last year for trainer Peter Miller. Samurai Charm excels at a mile, and in her only attempt at the Hirsch distance, in last year’s Zenyatta, she finished sixth after leading early.