Secretariat, Pucker Up on Hiatus to Preserve CD Turf 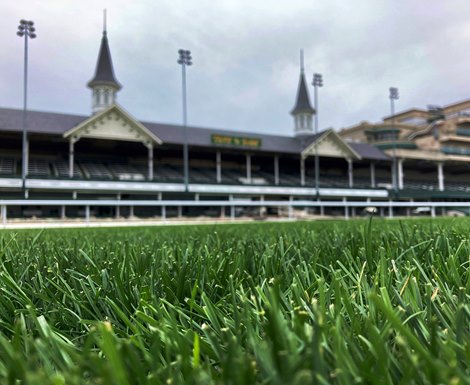 Churchill Downs has placed the $300,000 Secretariat Stakes (G2T) and the $200,000 Pucker Up Stakes (G3T) on hiatus, and will run the Arlington Million (G1T) and Beverly D. Stakes (G1T) in two different lanes Aug. 13 as efforts to mature the new turf course there continue, officials with the Louisville oval announced Aug. 4.

The track is set to host a stand-alone Arlington Million Day program for the first time after Churchill Downs Incorporated shuttered Arlington International Racecourse, the northern Illinois racetrack that hosted the Arlington Million from its inception in 1981 through 2021. The race was run as the Mr. D Stakes last year in honor of the late Richard Duchossois, who owned Arlington from 1983 until its sale to CDI in 2000. CDI reached an agreement last fall to sell the Arlington property to the National Football League’s Chicago Bears.

Churchill Downs debuted its new $10 million turf course April 30 but ran into issues with the surface approximately a month into the spring meet. Installed in October and given from then until the end of April to take root, the widened course with a new irrigation system was unable to withstand usage. The track suspended turf racing June 11 through the July 4 end of the spring meet following an equine fatality June 10 during racing on the course.

“While our new Bermuda-hybrid turf course continues to mature to its ultimate potential, we are being appropriately conservative by limiting the number of races in the best interest of long term preservation of the surface and growing root system,” Churchill Downs Racetrack president Mike Anderson said in a release. “The course is healthy and vibrant and we are extremely optimistic about its performance now and in the future. However, we don’t want any setbacks to its progression, especially right now during its critical growth season.

“Our plan is to take advantage of the width and versatility of the new course and run the two marquee races—the Arlington Million and Beverly D.—in two separate running lanes to provide fresh ground for each important race.”

The 39th running of the $1 million Arlington Million for 3-year-olds and older at 1 1/8 miles on turf will be run late in the program from Lane 1, with a maximum of 14 entrants.

Churchill Downs experienced problems with its prior turf course during its cooler fall meets, leading to a suspension of grass racing in the fall of 2020. The new course was designed for increased durability through use of a different grass mixture of Tahoma 31 Bermudagrass overseeded with ryegrass.