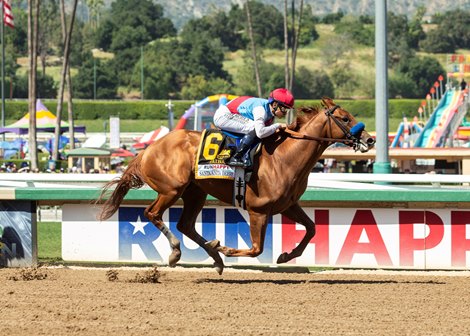 Santa Anita Park has announced that its 2022-23 Winter/Spring Stakes Schedule will offer fans and horsemen a total of 93 stakes, 10 of them grade I events, including the $750,000 Runhappy Santa Anita Derby (G1) on April 8, and 58 graded races beginning with the track’s traditional opener on Monday, Dec. 26 through closing day, June 18.

“We’re pleased to be able to announce our Winter/Spring stakes schedule at this time and to once again let everyone know that our ‘Ship & Win’ program will be available to those out of state horses that qualify throughout the meet,” said Santa Anita Director of Racing and Racing Secretary Chris Merz. “We feel there is something for everyone in this stakes schedule and we are excited to offer it. We worked diligently with trainers and other industry stakeholders to create a program that suits our horse population and caters to the needs of our owners and horsemen.”

Santa Anita’s prestigious roster of grade I stakes will resume on Saturday, March 4, as the $500,000 Santa Anita Handicap presented by Yaamava’ Resort & Casino and the $500,000 Frank E. Kilroe Mile (turf) will take center stage along with one of America’s most important Derby preps, the $400,000 San Felipe Stakes (G2).