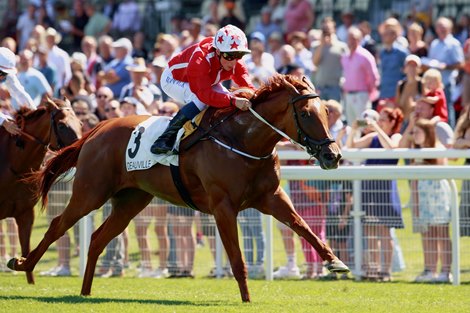 Saffron Beach  overcame a six-hour delay at Folkestone to announce herself as one of the leading fillies in Europe by winning the Prix Rothschild (G1) at Deauville Aug. 2.

It took the 4-year-old and trainer Jane Chapple-Hyam 12 hours to make the journey from Newmarket to northern France, but it had no ill-effect as last season’s Kingdom Of Bahrain Sun Chariot (G1) heroine traveled powerfully at the head of affairs to turn away a dual group 1 winner in Tenebrism  under a well-judged ride from William Buick.

“She’s very brave, very tenacious, and probably been better here than she was at Royal Ascot,” said Chapple-Hyam.

“They came to challenge her and she found another gear and went away, so that’s nice to see. We’re very pleased because we were giving seven pounds to younger rivals.

“She’s maturing now. As a younger horse, she always had a traveling companion in the horsebox with her and now since Dubai, she’s grown up. She can travel on her own now, which makes the job easier for me.

“I did travel down with her in the horsebox Sunday, but I think I’ll jump on William’s plane to get home!”

Expanding on travel issues that might have deterred many, Chapple-Hyam said: “It took 12 hours door to door from Newmarket. We left Newmarket, and it was six hours waiting to get on the Eurotunnel—just six hours hanging around, really.

“She’s learning all the time and if she’s going to go to Ireland or America, she has to learn about traveling. Post COVID-19 and Brexit, they’re the rules, and it’s good that she has adjusted and matured.”

Saffron Beach was cut to 8-1 (from 10) by Paddy Power for the Maker’s Mark Breeders’ Cup Filly & Mare Turf (G1T) Nov. 5 and Keeneland is her ultimate aim.

“The plan was, if we could get her to the Breeders’ Cup and work backwards,” said Chapple-Hyam. “She’s in the Coolmore America ‘Justify’ Matron Stakes (G1) at Leopardstown and the Kingdom of Bahrain Sun Chariot Stakes at Newmarket.

“It’s been a long season for her starting in Dubai in March, but she does get those breaks in between, and she does get turned out and enjoy some grass. But I expect she’ll go to stud at the end of the year; she’s earned it.”

Keeneland’s turf track configuration means that the sex-restricted race will be over an extended nine furlongs, although Saffron Beach will also be given the option of the FanDuel Breeders’ Cup Mile (G1T) in open company.

“I think we’ll nominate her in both and see what the competition is,” said Chapple Hyam. “Knowing the owners, they’ll probably want to stick to the Filly & Mare, but you can nominate in both and have a look.

“I’m just pleased she is traveling and she’s more mature in her mind. She’d shown that over the winter and her demeanor is different now.

“When she went to Dubai we couldn’t be with her. You hand the horse over to the representative of the airline; you’re not allowed any of your own staff.”

Buick has been on board for both of Saffron Beach’s group 1 victories, and he paid tribute to her no-nonsense attitude.

“She’s super easy and is very, very good,” said Buick. “She loves her work, and she worked about 10 days ago and was in really good form.

“She came out of Ascot and had a nice break, and she really put it to bed the last 100 yards. She’s a very, very talented horse.”

What a filly! Saffron Beach pulls clear of Tenebrism in the Group 1 Prix Rothschild at @fgdeauville for William Buick and @JaneChappleHyam ⭐️ pic.twitter.com/idl1auiKZw

Tenebrism and Malavath  both threw down a serious challenge at the furlong marker, with the Haras d’Etreham Prix Jean Prat (G1) winner pushing Saffron Beach the hardest, although the winner had pulled out 2 1/2 lengths at the line.

Tenebrism’s trainer Aidan O’Brien said: “She ran very well and we’re delighted with her return to the mile. She is obviously very good at seven furlongs, but I still think she’s capable of performing at a mile.

“She could come back to France or else there is the Matron Stakes.”