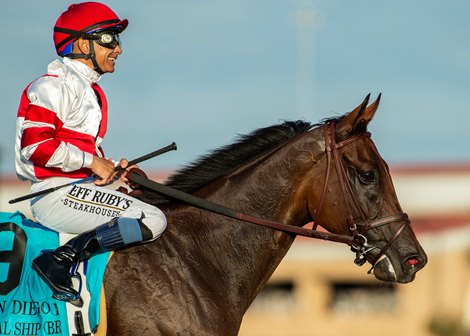 Royal Ship  is in “good shape” according to Gary Mandella, the son of Hall of Famer Richard Mandella who missed the gelding’s winning trip in the July 30 San Diego Handicap (G2) at Del Mar due to being ill with COVID-19.

“He sounded a heck of a lot better when Royal Ship won than he did this morning without the adrenaline rush,” Mandella said. “Thanks to things like TVG he was able to watch it all. You certainly miss a lot less in these situations than you did previously.”

Despite facing formidable rivals such as Country Grammer , Stilleto Boy , and Mandaloun yesterday afternoon, there was never a doubt in Mandella’s mind that the 6-year-old son of Midshipman   was capable of landing the San Diego.

“(Royal Ship is) a horse that everybody who’s ever been around him has always believed that he’s been that good,” Mandella said. “Early after he came from Brazil, he just had some really bad trips and was trying to run some really big races and wasn’t tactically in a situation to show it off.

There are no future plans yet for the multiple graded stakes winner as Mandella waits for his father’s health to return.

“Dad has a very mild case,” Mandella said. “He’s fine but he’s staying home because that’s what you’re supposed to do. He’s fighting it a little but but he’ll be OK.”