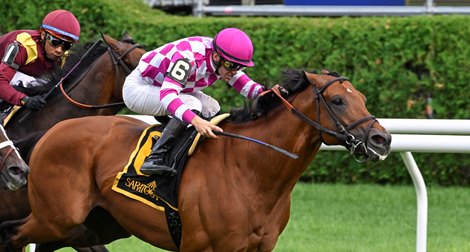 The last two races run by Rockemperor , well, trainer Chad Brown wasn’t going to concern himself with those.

A pair of fifth place finishes in a pair of graded stakes races to start the 6-year-old’s season didn’t matter on July 31.

Brown had some confidence when he sent Rockemperor, owned by Michal Dubb, Wonder Stables, Michael E. Kisber and Michael J. Caruso postward in the 64th running of the $250,000 Bowling Green Stakes (G2T) at Saratoga Race Course.

That’s because the son of Holy Roman Emperor  had shown Brown plenty of life in the mornings at the Spa.

Those solid drills on the turf course on the Oklahoma Training Track carried over to the Bowling Green as Rock Emperor rallied to win the 1 3/8 mile race over an inner turf course labeled firm.

Ridden by Flavien Prat, Rock Emperor won by a half length over the hard-charging Arklow  and jockey Irad Ortiz Jr.

“The key to this horse is getting him on firm turf,” Brown said. “He had a really good trip and I was pleased with the way it worked out. Flavien did a great job.”

Rockemperor has now won four of 22 career starts on grass with four seconds and six third-place finishes. The last eighteen starts have been out of Brown’s barn; he started his career in Europe.

Sent off as the slight 2-1 favorite in the field of five, Prat and Rockemperor were content to settle at the rear of the field in the early stages of the race. Stablemate L’Imperator , also a son of Holy Roman Emperor, set the pace with Manny Franco on board.

Into the final turn, Rockemperor began his bid and was coming at the quarter pole. He closed strongly and took the lead at the sixteenth pole. He had put away L’Imperator but had to brace for the challenge of 8-year-old Arklow and Irad Ortiz Jr.

“I was traveling well all the way around,” Prat said. “When I tipped out, he gave me a good kick.”

Arklow was charging at the end but Ortiz lost some ground when he had to steady slightly behind tired rivals at the top of the stretch. When he got clear, Arklow, making his first start since October, was full of run.

“We didn’t really have a clean run down the lane,” Arklow’s trainer Brad Cox said. “I think he wins with a cleaner trip, I really do.”

“I think we were unlucky, or I waited too long to get him out,” Ortiz said.

Brown indicated that he will look for a fall target for Rockemperor next.

“He’s getting up there in age, but he’s starting to round back into form,” he said. “Getting the firmer ground is going to be a little more challenging (in the fall)”.”

Rockemperor was second in this race last year behind Cross Border , who was fifth in this year’s edition. He completed the journey in a time of 2:15.81 and paid $6.90.

L’Imperator finished a half-length behind Arklow in third and was 2 3/4 lengths in front of Highland Chief , who was a neck in front of Cross Border.