Rich Strike Maturing Ahead of Travers 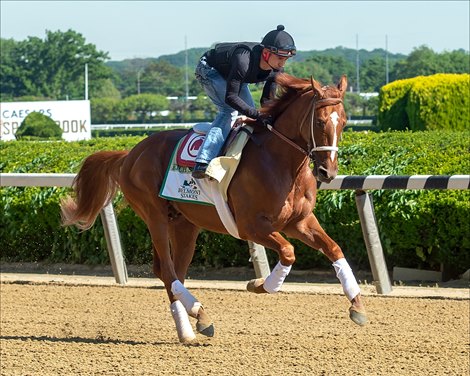 The colt that upset the May 7 Kentucky Derby presented by Woodford Reserve (G1) at 80-1 odds is beginning to relax in training for trainer Eric Reed. The timing couldn’t be better as RED TR-Racing’s Rich Strike  readies for the Aug. 27 Runhappy Travers Stakes (G1) at Saratoga Race Course.

“He’s matured. His mind is better on the track. That’s what we’ve battled all year,” Reed told BloodHorse Aug. 3 from the trainer’s base at Mercury Equine Center near Lexington. “He would get too eager to do things, and it took him a while to calm down and train the right way, but with this rest after the Belmont, he’s a lot better horse on himself than he was going into those races.

The 3-year-old son of Keen Ice   has also noticeably filled out in appearance, with muscles brimming along his neck, shoulders, and hip since the running in two legs of the Triple Crown. After the Derby, he ran sixth in the Belmont Stakes Presented by NYRA Bets (G1).

After conducting his last two breezes at Mercury, Reed vanned Rich Strike over to Churchill Downs for a sharper tune-up ahead of the Travers.

Rich Strike went five furlongs in 1:01 there Aug. 1 under regular exercise rider Gabriel Retana. He galloped out six furlongs in 1:14.

“(The breeze) was much better than I was anticipating,” Reed said. “He was much more relaxed. He worked strong, galloped out strong, and didn’t get tired at all. I was happy with the maturity he showed afterward. Instead of being so eager and playful (coming off the track), he was all business.”

Reed reported that Rich Strike will ship up to Saratoga Aug. 13 or Aug. 14 to begin training over the track and possibly have one final work before the Travers. At least several horses that he defeated in the Derby, including recent Jim Dandy Stakes (G2) victor Epicenter  and TVG.com Haskell Stakes (G1) winner Cyberknife , could also run in the Travers. The 1 1/4-mile classic is likely to have championship implications.

“Epicenter has been the horse to beat every race,” Reed said. “He’s the horse to beat again. To get to the winner’s circle you have to go through him, but we need a lot of luck in the way the race is run because we come from so far back. (Rich Strike) just has that running style. But I know he’ll run a much different race than what everyone saw in the Belmont because there’ll be some pace, and he’ll like that track a little better than he liked Belmont.”

In the June 11 Belmont Stakes, Rich Strike trailed the field throughout before being tipped five-wide around the final turn, lacking the same electrifying late kick he had displayed in the Derby. The colt finished 13 1/4 lengths behind victorious Mo Donegal , who is now sidelined.

Reed believes it was a mistake to take Rich Strike out to the center of the track to launch his rally in the Belmont, and while he doesn’t think that the colt needs to be glued to the inside rail, he races much more comfortably and willingly with a horse to his outside.

“When we go to let him run (in the Travers), we’ll let him do it his way, which is in between, down on the rail, whatever we have to do to zig and zag through horses, and hopefully there’s enough pace to set it up where he’ll have a fighting chance at it,” Reed said.