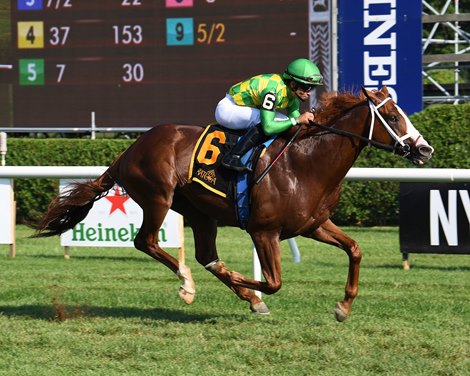 Although Brad Cox was the one wearing the baseball cap, Donegal Racing CEO Jerry Crawford offered a verbal tip of the hat to the trainer as he stood in the winner’s circle after the $200,000 National Museum of Racing Hall of Fame Stakes (G2T).

“Just for the record, Brad Cox did prove today that he is smarter than me,” Crawford said. “I thought going to the front would be tricky.”

In this Aug. 5 edition of “Trainer Knows Best” at Saratoga Race Course, Cox’s belief in putting Donegal’s Ready to Purrform  into the mile turf stakes for 3-year-olds early proved worthy of Nostradamus as the son of the late Kitten’s Joy quickly grabbed the lead and never looked back in posting a 1 1/4-length victory over a fast-closing Wit , who was making his turf debut.

“I haven’t been coming to Saratoga that long, but I’ve learned that you need speed on the inner turf,” Cox said. “On paper, it didn’t look like there was much speed in the race.”

While it was not surprising that Ready to Purrform crossed the wire first—he was after all the co-second choice at 7-2—his manner of victory under Joel Rosario was hardly typical. In his five career starts, at five different tracks, he had never been closer than third at the opening half-mile. Yet in those races, he showed promise, especially when the son of the More Than Ready   mare Elementar finished third behind the highly regarded Annapolis  after being bumped and racing wide in the July 4 Manila Stakes.

“We hadn’t gotten to the best of this horse,” Crawford said, “and we thought maybe this was the day.”

While Chanceux , who drew the rail, looked like lone speed in the race, he became rank under jockey Irad Ortiz Jr. and backed off to run in third before fading to last in the field of eight.

That left it to Ready to Purrform and 5-2 favorite Tiz the Bomb , who also showed an unusual amount of early speed, to battle on the front end through a half-mile in :47.17 on firm turf.

Leaving the quarter pole, as Tiz the Bomb dropped back to fourth, Ready to Purrform pulled away and extended to a 3 1/2-length lead at the eighth pole, en route to winning in 1:33.99 and paying $9.80 to win.

“He looked like he was enjoying everything up there and he just kept going,” Rosario said.

Repole Stable, St. Elias Stable, and Gainesway Stable’s Wit, a multiple grade 3 winner on dirt and co-second choice, broke out at the start, then tipped out and rallied wide from sixth to grab second. The son of Practical Joke   trained by Todd Pletcher was a half-length ahead of Stuart S. Janney III’s Celestial City , an Uncle Mo   colt trained by Shug McGaughey.

The win, his initial graded stakes victory, was the third in six starts for Ready to Purrform and raised his earnings to $263,100. He won the Laurel Futurity as a 2-year-old.

Bred by Bonne Chance Farm, Ready to Purrform was bought for $150,000 from the Hidden Brook consignment at the Fasig-Tipton Kentucky Selected Yearlings Showcase. He is Elementar’s second foal and her first stakes winner. She has also produced a Runhappy   yearling colt and Noelani, a 2-year-old filly by Bernardini .

The win also accounted for another graded stakes winner from multiple leading sire Kitten’s Joy, who passed away last month at the age of 21.

“I just spoke to Ken Ramsey (the owner/breeder of Kitten’s Joy) at the jockey’s karaoke event (July 31),” Crawford said, “and I told him how sad we were and how proud we are of the Kitten’s Joy we still have.”

No doubt that pride grew after Crawford listened to Brad Cox.