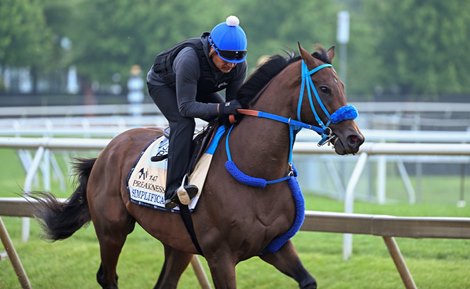 Simplification , winner of the Fasig-Tipton Fountain of Youth Stakes (G2), and Skippylongstocking , third in the Belmont Stakes Presented by NYRA Bets (G1), are among the seven 3-year-olds entered in the $500,000 West Virginia Derby (G3) at Mountaineer Casino, Racetrack & Resort Aug. 6.

The 1 1/8-mile Derby for 3-year-olds is one of seven stakes on a nine-race Saturday program that begins at the special post time of 2 p.m. ET. The $200,000 West Virginia Governor’s Stakes (G3) is the other graded race on the card.

Owned by Tami Bobo and Tristan de Meric, Simplification has had a productive 3-year-old campaign dating back to Jan. 1. After the Fountain of Youth at Gulfstream Park, he finished third in the Curlin Florida Derby Presented by Hill ‘n’ Dale Farms at Xalapa (G1) and a closing fourth in the Kentucky Derby Presented by Woodford Reserve (G1). In his most recent start, the Not This Time   colt was sixth in the Preakness Stakes (G1). Having bled in that race, he received a rest before a series of workouts to prepare for the remainder of 2022.

Trained by Antonio Sano, who is based in Florida, Simplification has been stabled at Mountaineer since July 30 to get acclimated, and the early arrival has been positive, according to Alex Sano, the trainer’s son and assistant who is overseeing the horse at Mountaineer.

Should he run well, the West Virginia Derby could be a launching pad for the colt toward the $1 million Pennsylvania Derby (G1) at Parx Racing Sept. 24. Jose Lezcano rides from post 2.

Daniel Alonso’s Skippylongstocking, trained by Saffie Joseph Jr., has performed well in top company since arriving in New York after wintering in Florida. The Exaggerator   colt finished third in the Wood Memorial Stakes Presented by Resorts World Casino (G2) before a fifth-place finish in the Preakness and his show finish in the Belmont.

“He has been training well,” Joseph said. “This race has been the main target.”

Skippylongstocking, expected to ship to Mountaineer two days before the Derby, starts from post 7 with Edwin Gonzalez aboard.

We the People, owned by WinStar Farm, Bobby Flay, CMNWLTH, and Siena Farm, ran fourth at 7-2 odds in the Belmont after leading for more than a mile in the 1 1/2-mile third leg of the Triple Crown. Trained by Rodolphe Brisset, the colt by Constitution   won the Peter Pan Stakes (G3) at Belmont by more than 10 lengths at the West Virginia Derby distance.

He is the 2-1 morning-line favorite.

Trainer Brad Cox nominated five to the Mountaineer fixture and opted to enter Gary and Mary West’s Home Brew , a winner of his last two starts: the Oaklawn Stakes at Oaklawn Park and the TVG.com Pegasus Stakes at Monmouth Park in New Jersey. The Street Sense   colt is 4-for-6 in his career.

Steve Asmussen, who has won five editions of the West Virginia Derby—the most of any trainer—entered Three Chimneys Farm’s King Ottoman , who won the Texas Derby at Lone Star Park before finishing third in the Indiana Derby (G3).

Fulsome, a winner of seven of 13 starts for Juddmonte Farms and trainer Cox, is the 3-1 morning-line favorite.