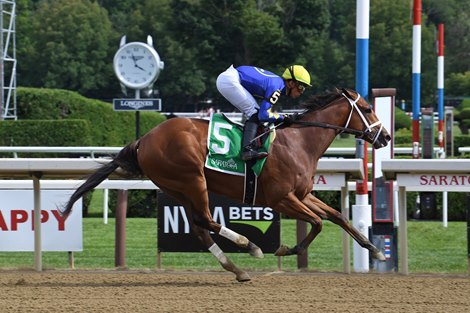 When a 2-year-old filly who is a half sister to the 2022 Belmont Stakes Presented by NYRA Bets (G1) winner makes her debut at Saratoga Race Course it creates a buzz.

When that aforementioned filly with all of the two-turn black type in her pedigree dazzles at 5 1/2 furlongs, the connections just might have something special on their hands.

StarLadies Racing, LNJ Foxwoods, and Gainesway Stable’s Prank  surely lived up to the expectations of her bloodlines and a 1-2 price on the toteboard as the half sister to Mo Donegal  by Into Mischief   recorded an eye-catching 9 3/4-length victory in the July 31 sixth race at the Spa.

Trained by Hall of Famer Todd Pletcher, Prank set the early pace through a half-mile in :45.11 and then exploded in the stretch to post her lopsided victory in 1:03.95 under jockey Irad Ortiz Jr.

“We knew she was fast and it’s exciting to have that kind of pedigree on the bottom side. She did everything for us today like she has been doing it for us in the morning,” said Pletcher, who listed the Sept. 3 Spinaway Stakes (G1) at the Spa as the next stop for the daughter of the Pulpit mare Callingmissbrown bred by Ashview Farm and Colts Neck Stables.

Prank, whose currently sidelined 3-year-old half-brother is also a two-time grade 2 winner at 1 1/8 miles for owners Donegal Racing and Mike Repole, was bought for $500,000 by Solis/Litt from the Ashview Farm consignment at the Keeneland September Yearling Sale.

“She knocked my socks off with this performance,” said Laurie Wolf, founder and managing partner of StarLadies Racing. “We were talking with Todd and he told us she’s a fast filly and she might not stretch out but he added that the pedigree says she’ll stretch out. It was so impressive.”

Jamie Roth of LNJ Foxwoods said there was some relief in seeing the young filly exceed some lofty expectations.

“You can never imagine what they will do,” she said. “You hope for these efforts.”

Prank is the third and most recent foal from her dam who has produced three winners.