Pletcher Could Send Out Strong Trio in Whitney 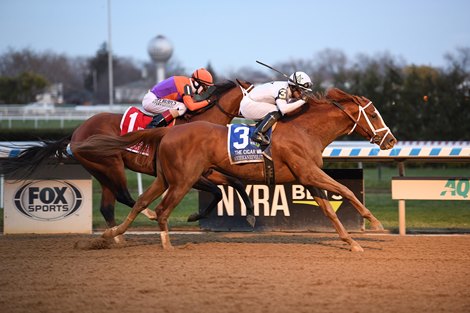 When entries are taken Aug. 3 for next Saturday’s $1 million Whitney (G1) at Saratoga Race Course, Todd Pletcher will have three of them. The Hall of Fame trainer said July 31 that Americanrevolution , owned by WinStar Farm and China Horse Club, will be entered in the 1 1/8 mile race, joining prohibitive favorite Life Is Good , from the same ownership as Americanrevolution, and Wertheimer and Frere’s Happy Saver .

However, there is no guarantee that Americanrevolution will run. Pletcher could still opt to run the New York-bred son of Constitution   in the $1.25 million Jockey Club Gold Cup (G1) on Sept. 3.

“We will take a look at it and see how everything pans out,” Pletcher said. “It’s part of an insurance policy, especially with Americanrevolution. You never know what can happen, someone might have an off day. Having another horse in there can give you some added security.”

Pletcher huddled with WinStar President, CEO and Racing Manager Elliott Walden after Americanrevoluton worked four furlongs July 30 in company with Happy Saver in :49.75 over the Saratoga oval and came up with this plan.

“What surprised me about him was how rapidly he ascended up the ranks,” Pletcher said. “He went from a maiden New York-bred at Belmont to Finger Lakes (won New York Derby) and then came back here (won Albany Stakes), a third in the Pennsylvania Derby (G1) and then won the Empire Classic and Cigar Mile.

“In five months, he went from a New York-bred maiden to a grade I,” he said. “That’s something you don’t see very often. He is a solid horse, for sure.”

Pletcher said Luis Saez will ride Americanrevoluton in the Whitney if he goes. Irad Ortiz Jr. will be aboard Life Is Good. Happy Saver, who was second, beaten six lengths by Flightline  in the Hill ‘N’ Dale Metropolitan Handicap (G1) at Belmont Park June 11 in his last start, will have to get a new rider. In the Met Mile, Happy Saver was ridden by Ortiz Jr.