Plans in Motion to Bring Racing Back to Massachusetts 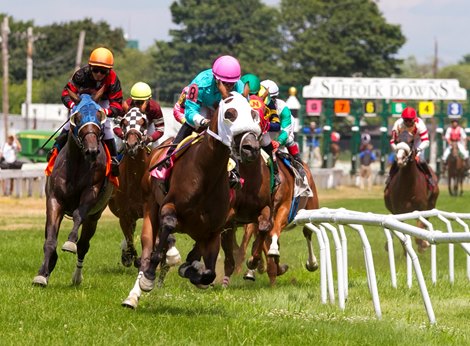 Richard Fields, the former owner of Suffolk Downs, is aiming to get back in the game. Along with Armand Janjigian, a longtime Thoroughbred owner and breeder in Massachusetts, he is planning to develop a new racetrack and restore live racing in the state under the banner of Commonwealth Racing.

“We have been working with Richard Fields and Armand Janjigian. They have already purchased the land,” said Anthony Spadea Jr.,  president of the New England Horsemen’s Benevolent and Protective Association. “We are 100% supportive of any group of horsemen that are looking to build a racing facility. At this time, they are the only ones who have come to us and asked for our help.”

In 2021 the same ownership group proposed developing the $25 million Agricultural and Equine Center in Sturbridge, Mass., where Janjigian and his family have deep roots, with a one-mile dirt track and seven furlongs turf course, but the town voted down changing the necessary zoning laws and the project fizzled.

This plan for a new racetrack, which is to be situated in a central Massachusetts town which Spadea did not want to be disclosed at this time, still needs the approval of local townsfolk, but now there is more steam behind this proposal.

“Our members have worked tirelessly during the legislative session to speak directly to legislators about how critical the racing industry is in Massachusetts,” Spadea said. “We are grateful to the leadership in the House and Senate for taking the time to understand and appreciate that the sport we love is also a means to protect our farms for haying and breeding and an important source of economic development and jobs in rural Massachusetts.”

Sterling Suffolk Racecourse, the former owner of Suffolk Downs, sold the property that straddled the cities of East Boston and Revere to a major real estate developer in 2017 and ended live racing in June 2019. Since then, SSR has still operated the simulcasting business on-site.

Fields did not respond to a request from the BloodHorse for comment, but Spadea said that plans to build the new equine facility are on track and moving forward with alacrity.

“We would have preferred passage of this legislation sooner in the session, but like championship racing, the legislature took this right to the wire and crossed the finish line just in time,” he said.

To start, those plans call for turf racing exclusively and a limited number of days in a boutique meet, likely in the fall. In the final five years of live racing at Suffolk Downs, SSR hosted limited racing festivals on a few summer weekends. In 2019 there was a total of eight days of racing and the average daily purse distribution was around $500,000.

Purses for live racing are supplied by the state’s Racehorse Development Fund, which is fueled by a percentage of the profits from the two in-state destination resort casinos and lone slots machine facility at the Penn National Gaming Inc.-owned Plainridge Park Casino, which is also the sole live harness racing track.

While the Massachusetts State Senate has continually tried to strip the money out of the RHDF over the years and divert it to the General Fund, the revenue stream derived from sports betting is expected to be a boon to the racetracks.

“We know we can do a festival-style race meet,” Spadea said.

Reportedly, the NEHBPA and Commonwealth Racing have already negotiated a purse agreement, and the ownership group will apply to the Massachusetts Gaming Commission, which regulates all racing and gaming in the state, for a live Thoroughbred racing license as soon as this fall. Applications are due by Oct. 1.

On Aug. 4, the MGC held an open meeting to discuss procedures for the implementation of sports betting in the Commonwealth and regulatory issues.

Churchill Proceeds in Acquisition of Poker Room in New Hampshire

Also in the northeast, Churchill Downs Inc. is proceeding with the acquisition of the most lucrative charitable gaming operation in the State of New Hampshire. Chaser’s Poker Room, located in the Town of Salem, sits on the state’s southern border with Massachusetts.

In 2021 New Hampshire passed a law allowing charitable gaming operators to offer Historical Horse Racing at licensed facilities. New Hampshire, previously home to the defunct Rockingham Park, is the only state to have HHR without any live racing.

Initially, CDI planned on executing the deal for Chaser’s in the second quarter of 2022 and undertaking a major expansion of the business.

“We anticipate closing on our acquisition of Chasers Poker Room in Salem, New Hampshire, as well as finalizing plans for our new gaming facility in Salem in the third quarter of this year. Our current plans contemplate opening a new facility with 650 gaming positions, including (HHR) and table games with the potential to add more after we open,” said CDI’s vice president of corporate communications Tonya Abeln.

The transaction needs final approval from the New Hampshire Lottery Commission, which is the regulatory agency for every type of gambling statewide.

This past April, it came to light that state officials were looking into Twinspires.com and its parent company CDI, contending that the advance-deposit wagering outlet is operating without a license or any other regulatory permission.

At that time, an official with CDI said the company’s ADW is not in violation of the law. He said the Twinspires operations are regulated by the federal Interstate Horse Racing Act, and CDI remains in full compliance.

In April, representatives of CDI and the State of New Hampshire began talks on the issue, and they remain ongoing between the two parties, according to an official.

A spokesperson for the New Hampshire Attorney General told the BloodHorse this past spring that the office had not notified CDI that it is taking any action against the company. The spokesman did not respond to a Thursday request for further comment.