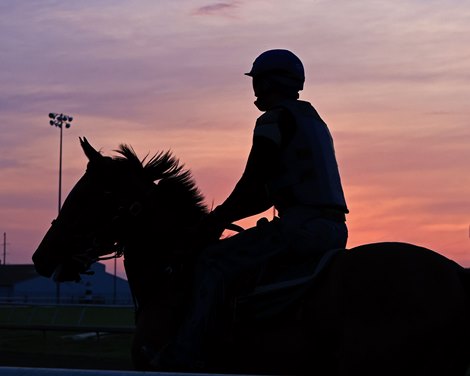 The legal team for Dr. George Maylin and connections of Medina Spirit on Aug. 1 lost an effort in the state Supreme Court in Tompkins County, New York to stop enforcement of a subpoena served on Maylin to produce research records connected to his study of Medina Spirit’s post-race positive for betamethasone after the 2021 Kentucky Derby Presented by Woodford Reserve (G1).

Judge Elizabeth Aherne granted a petition filed by the Kentucky Horse Racing Commission to enforce the subpoena and directed Maylin to turn over documentation of the research study, subject to a protective order that would limit its dissemination.

Craig Robertson, attorney for trainer Bob Baffert, and Maylin’s attorney Joseph Farraldo fought hard against KHRC’s petition. Robertson, in a brief filed in Aherne’s court, described KHRC’s effort to enforce the subpoena “shockingly misleading and wholly without merit,” wrote that Maylin’s records are “completely irrelevant,” and add that “this is par for the course for an agency that has consistently demonstrated a willingness to ignore the truth to achieve its desired result.”

Aherne stayed enforcement of the order granting enforcement of the subpoena for 10 days to allow time for the parties to ask KHRC hearing officer Clay Patrick, who on April 8 signed off on the subpoena in the first place, to quash or modify the subpoena .Amr Zedan’s company, which owned Medina Spirit before his death in December, did not file papers in the New York case but is a party to it.

Aherne’s order says KHRC followed proper legal procedures to enforce the Kentucky subpoena in New York and that Maylin partially complied with it by being deposed and providing numerous documents; however, he adamantly refused to turn over documents from a study he described in the initial disclosure of his findings when he reported analytes of the salve Otomax were found in a urine sample taken from Medina Spirit and two Thoroughbred research horses.

“These analytes were detected in a topical administration of OTOMAX to two thoroughbred research horses,” Maylin wrote in a Dec. 3 letter to attorneys for KHRC and Baffert under the letterhead of the New York Equine Drug Testing and Research Laboratory. “The analytical data to support these findings and the metabolism and excretion studies are available for review by an expert scientist in our Ithaca Laboratory. We consider this to be a research project that will be submitted to a peer reviewed journal and as such is confidential until the data has been submitted for review.”

In Kentucky, confidentiality and privilege are two different things in the legal world. By way of example, patient medical records are confidential, but if relevant they are not privileged from disclosure in a lawsuit where a patient’s medical status is in question. In a June deposition, however, Maylin flatly refused to agree to disclose the research data despite being served with a subpoena requiring same that Aherne’s ruling was lawfully executed.

If the subpoena stays in place and Maylin remains defiant, it would not be surprising if KHRC prosecutor Jennifer Wolsing, who represented KHRC in the New York case, asks Patrick to exclude Maylin’s opinions from evidence in Zedan’s and Baffert’s appeals.

Should Maylin relent, experts hired by KHRC prosecutors would ask for time to examine the documents and provide attorneys for Zedan and Baffert a heads-up on any criticisms they have of it. Whether that would lead to another postponement of the appeal hearing is anyone’s guess, but the odds of a delay would be increased.