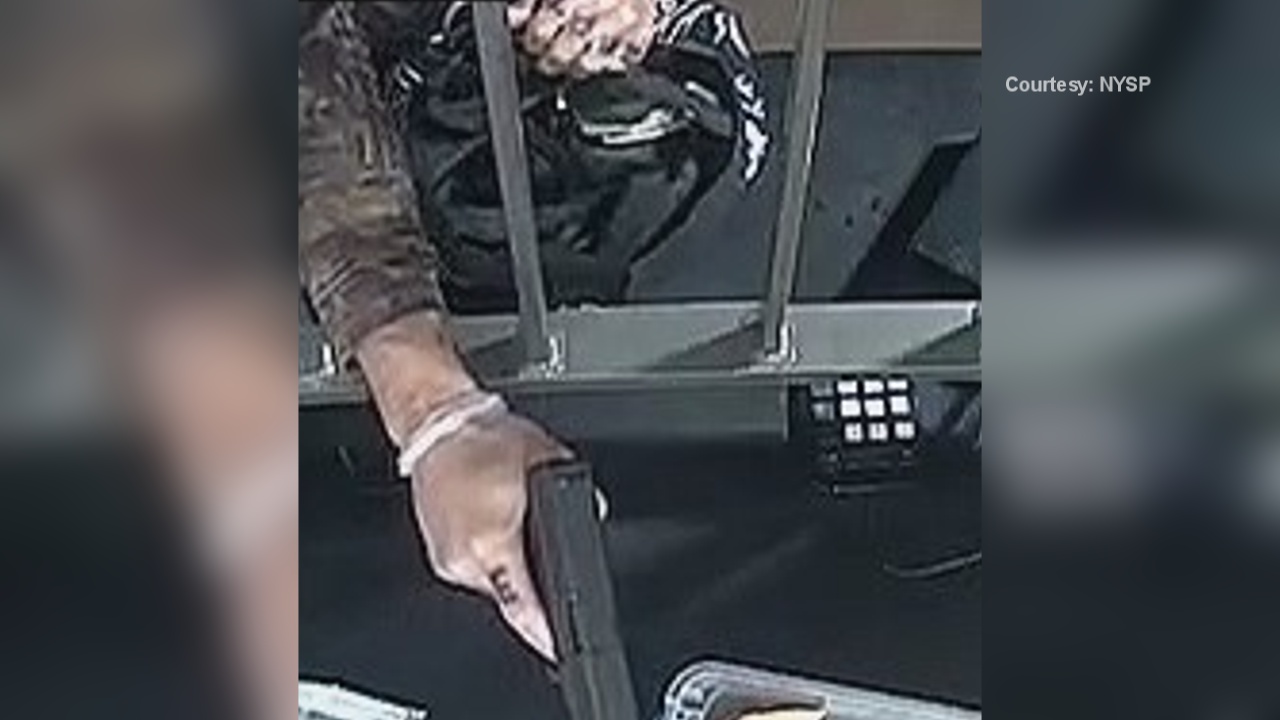 The robber who held up Seneca Gaming & Entertainment Oil Spring casino in Cuba, N.Y. on Saturday night remains on the loose. He was being sought by New York State Police.

The unidentified man pulled out a semi-automatic handgun at the cashier’s cage at about 11 pm, WIVB, a local TV station reported. He ordered a worker to hand over cash. The bandit was carrying a cloth shopping bag.

He shoved some stolen cash into shopping bag. He also stole a drawer with cash stuffed inside. It is unknown how much cash was stolen.

He had what was described as an “average build.” The word “love” was tattooed on his knuckles or drawn onto his gloves, the report adds.

He was white. He was about five feet, nine inches tall, the Wellsville Sun, a local newspaper, reported.

Only a few players were in the casino at the time. No one was injured.

It was described as a “very fast, couple minutes,” a manager told the Sun.

The casino is operated by Seneca Gaming and Entertainment. It is about 60 miles south of Buffalo, N.Y.

Robberies from South Dakota to Reno

Local police revealed the two masked bandits entered the casino, pulled a handgun on an employee and demanded money. The duo then fled the casino with an unknown amount of money. No one was injured.

To conceal their identity, they wore bandanas over their faces, KELO, a local TV station, reported.

Also, Reno, Nev. cops continue to search for the bandit who pepper sprayed a woman and stole her purse. It took place at the Peppermill Resort Spa Casino parking lot on July 15, according to KRNV, a local TV station.

The assailant pulled open the driver’s side door of the woman’s car, attacked her with the spray, and he then swiped her purse, police revealed.

Reno police said the suspect is black, between 30 and 40 years old, and between five feet, eight inches and six feet tall. He was wearing a jacket. White stripes were on the sleeves. He was also wearing jeans and red tennis shoes at the time of the robbery.

Last month, a third suspect was arrested after a string of recent robberies at gaming arcades in Lee County, Fla. His name is James Brown, according to the local sheriff’s office.

Brown, 45, was charged with armed robbery, Lee County Sheriff Carmine Marceno said. It relates to a robbery at the Lucky Turtle Arcade in North Fort Myers.

Earlier in July, an armed suspect allegedly placed a firearm to the head of an employee there, WINK, a local TV station, said. Jwyanza Chito, 34, who is believed to be from Philadelphia, was also charged with the robbery.

Chito and a second man, Lenny Myers, 45, of Cape Coral, Fla., were also charged with a holdup at the White Sands Arcade in Cape Coral. Each faces a charge of robbery with a firearm. The suspects face proceedings in local court.

The White Sands Arcade incident unfolded as Chito allegedly pulled out a Glock handgun and demanded money from an employee.

Once they got the loot — about $2,500 — the two fled from the scene. The money was stuffed into a pillowcase, police said.

There were other thefts in the region.