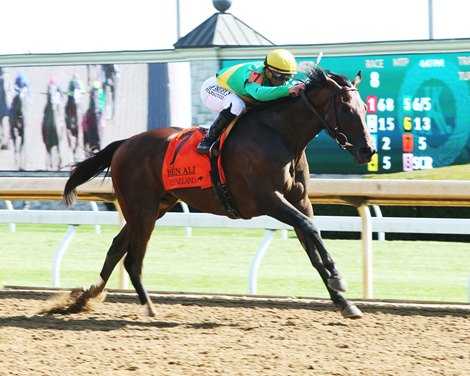 Multiple grade 3 winner Scalding  recently suffered a leg injury while pointing toward a start in the Jockey Club Gold Cup (G1) and has been retired from racing, according to Robert Clay of Grandview Equine.

“It’s a shame,” Clay said. “We were very high on him and hoping to run in the Jockey Club (Sept. 3 at Saratoga Race Course).”

Owned by Grandview, Cheyenne Stable, and LNJ Foxwoods and trained by Shug McGaughey, the son of Nyquist   retires with a 4-1-1 record from seven starts, including victories in the Ben Ali Stakes (G3) and the $100,000 Michelob Ultra Challenger Stakes (G3). In 2022 he won four of five outs.

Bred by Godolphin and Cobalt Investments out of the Medaglia d’Oro   mare Hot Water, Scalding was purchased for $400,000 by Solis/Litt from the Bluewater Sales consignment at The Saratoga Sale, Fasig-Tipton’s selected yearling sale in Saratoga Springs, N.Y. He earned $325,800.