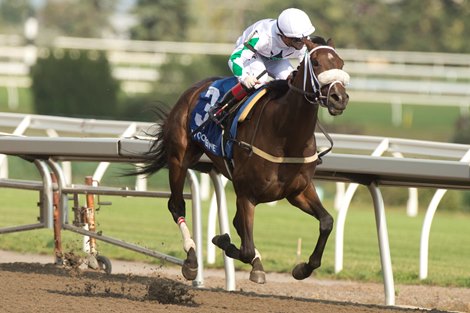 Moira , without hind shoes, made it look easy in taking the 67th running of the $500,000 Woodbine Oaks Presented by Budweiser July 24 at Woodbine.

Trained by Kevin Attard for X-Men Racing, Madaket Stables, and SF Racing, the 3-year-old daughter of Ghostzapper   took the lead around the turn for home and glided to a 10 3/4-length score and a possible date against the boys in the Aug. 21 Queen’s Plate.


Moira leaves absolute no doubt in the Woodbine Oaks pres. by @BudweiserCanada pic.twitter.com/kJiOjRFG1J

Positioned well off the pace (:23.54, :47.34) set by Loaded Vixen  and the Chad Brown-trained Sahlabiya , Moira sprang to action as the field raced into the final bend. Gobbling up ground as she advanced on the leaders, the filly appeared to have a tank plenty full at the top of the stretch.

And as her rivals soon discovered, she absolutely did.

“We just sat there and saved as much ground as we could and made our move down the backside,” said Hernandez. “I knew horses were going to be stopping in front of me, so I just tried to get her away from them. By the three-eighths, I was already where I wanted to be. Turning for home, I just talked to her and said, ‘Come on Moira, it’s all about you. Go get it.’ And she just exploded.”

The even-money favorite romped home the easiest of victors, hitting the wire in 1:49.78 for the 1 1/8 miles on the Tapeta surface.

Sister Seagull rallied from well back for second, while Sahlabiya finished third, a nose ahead of Souper Flashy , another Attard trainee.

Prior to the race, Moira lost one of her hind shoes.

“She had a little episode (in the paddock) and unfortunately stepped on her hind foot and kind of knocked off the one shoe and kind of bent the other shoe,” Attard said. “The paddock blacksmith tried to adjust it and fix it. I appreciate his effort. So, we elected to run her without the hind shoes. I wasn’t too concerned, with it being a synthetic surface. But you’re not accustomed to doing it, so it’s always a little bit in the back of your head anyways. She’s a class horse and I’ve always thought highly of her, and she ran to that today.”

The decision on whether to run in the $1 million Queen’s Plate will be a topic of conversation.

“We’ve discussed that, we spaced this race out with the possibility if things went well today that we could see her there,” said Attard, who won the Oaks last year with Munnyfor Ro . “We’ll have a little discussion about that. And as long as she comes out fine, I’m sure we’re willing to give it a try.”

Donato Lanni, of X-Men Racing, signed the ticket on Adena Springs-bred Moira for $150,000 at the 2020 Keeneland September Sale from the Hidden Brook consignment. Lanni deferred the Queen’s Plate decision to Attard.

“It’s going be up to her and Kevin,” Lanni said. “Fillies have won it before, but we’re just so lucky to be here today. So, let’s take one race at a time and thank you for Woodbine.”

The Woodbine Oaks has served as a Queen’s Plate stepping stone for fillies. Oaks-Plate champions include Holy Helena (2017), Lexie Lou (2014), Inglorious (2011), and Dancethruthedawn (2001). In 2018, Oaks runner-up Wonder Gadot went on to win the Queen’s Plate.