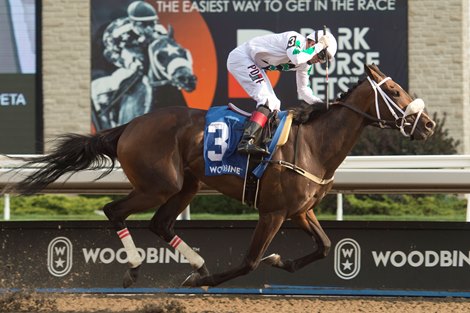 Differing from the Derby in being restricted to Canadian-breds and run on a synthetic surface at Woodbine, the Plate is further a race that fillies have won 37 times from its 162 runnings, compared to three female winners of the Kentucky Derby. Nine females have won the Plate since 1956,  Wonder Gadot  the most recent in 2018.

X-Men Racing, Madaket Stables, and SF Racing’s Moira  is the morning-line favorite to become the 38th female winner of the Queen’s Plate Aug. 21 when she faces 10 males, led by Plate Trial winner Sir for Sure  and Marine Stakes (G3) victor Rondure .

She is 5-2 on the morning line, the First Jewel of the OLG Canadian Triple Crown, with Rondure second choice at 3-1.

She managed her blowout victory despite needing both hind shoes removed after pre-race misbehavior in the walking ring resulted in her nearly twisting both off her feet.

“We’re trying to work on her antics,” Attard said during a post-position draw Aug. 17. “She always schools pretty decently. Obviously on race day it is a bit of a different story.

“She’s worked well in the interim. I think she’s put on weight since her last race. So I can’t be more pleased by the way she’s heading into the race.”

The Adena Springs-bred filly now attempts to stretch out to 1 1/4 miles, a distance over which her sire, Ghostzapper  , triumphed in the 2004 Breeders’ Cup Classic Powered by Dodge (G1) at Lone Star. Ghostzapper is also the sire of Queen’s Plate winners Shaman Ghost   (2015) and Holy Helena  (2017).

Attard seeks his first Queen’s Plate victory and will give a leg up to jockey Rafael Hernandez, who rode Stronach Stables’ Shaman Ghost to victory for trainer Brian Lynch. She breaks from post eight.

Moira faces six runners from the Plate Trial, including the race’s top two finishers, both trained by Hall of Famer Mark Casse.

“It’s a race you dream about winning and one you definitely want to win again,” said Casse. “To win it once was a huge thrill, to win it a second time was fantastic, and to win it a third time would be incredible.”

A son of Sligo Bay , Heste Sport’s Sir for Sure has raced most effectively in routes on the synthetic Tapeta surface at Gulfstream Park and Woodbine.

Angling out for room at the head of the lane in the Plate Trial, the towering 3-year-old pulled clear for a two-length win at odds of 21-1.

Declan Carroll, aboard for the Plate Trial victory, returns in the irons.

Hall of Dreams, who raced outside of Sir for Sure and was bumped by his stablemate at the head of the lane, also is bred for distance being by Lemon Drop Kid .

“The good news is that the extra eighth of a mile won’t hurt his feelings,” Casse said.

Hopes have long been high for Hall of Dreams after a promising runner-up finish last fall, after which he was acquired in a private purchase. He now races for owners Gary Barber, Wachtel Stable, Peter Deutsch, and Leonard Schleifer.

Skipping the Plate Trial after having two races already close together in the spring was Borders Racing Stable’s Rondure . The Katerina Vassilieva trainee has two wins from his last three starts, including the July 2 Marine Stakes at Woodbine by 5 1/2 lengths.

Rondure breezes in preparation for the Queen’s Plate at Woodbine

He stretches out from the 1 1/16-mile Marine, which he won in 1:43.57 under Hernandez after a runner-up finish in the June 12 Queenston Stakes. With Hernadez sticking with Moira, Flavien Prat picks up the ride on the Oxbow colt.

Explaining why she opted to skip the Plate Trial, “I just wanted to go in with a fresh horse,” Vassilieva said, noting his two previous starts in close proximity.

Other leading contenders include The Minkster , Duke of Love , and Causin’ Mayhem .

Post time for the Queen’s Plate is 5:41 p.m. ET. The race will be broadcast live in Canada on a television program that begins at 4:30 p.m. on TSN and CTV.