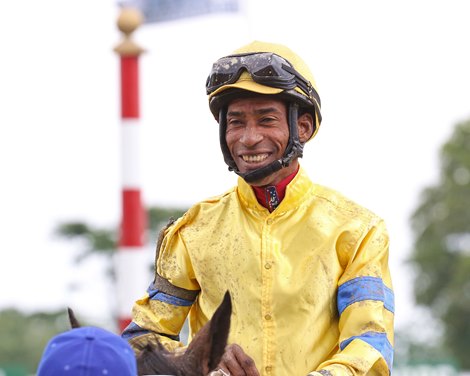 Jockey Richard Mitchell was taken by ambulance to Monmouth Medical Center in Long Branch for X-rays for a possible right clavicle fracture after being unseated from his mount July 31 in the sixth race at Monmouth Park, according to track medical director Dr. Angelo Chinnici.

Mitchell lost the irons at the start of the mile and a sixteenth maiden special weight turf race and then appeared to lose his balance and was unseated just before the first turn.

Dr. Chinnici said Mitchell was “alert and responsive, with movement in all of his extremities, and he did not show signs of any neurological damage.”

Mitchell’s mount, Staff Sergeant, was collared quickly and appeared to be fine after the race.

Mitchell has three wins from 56 mounts at the current Monmouth Park meet.