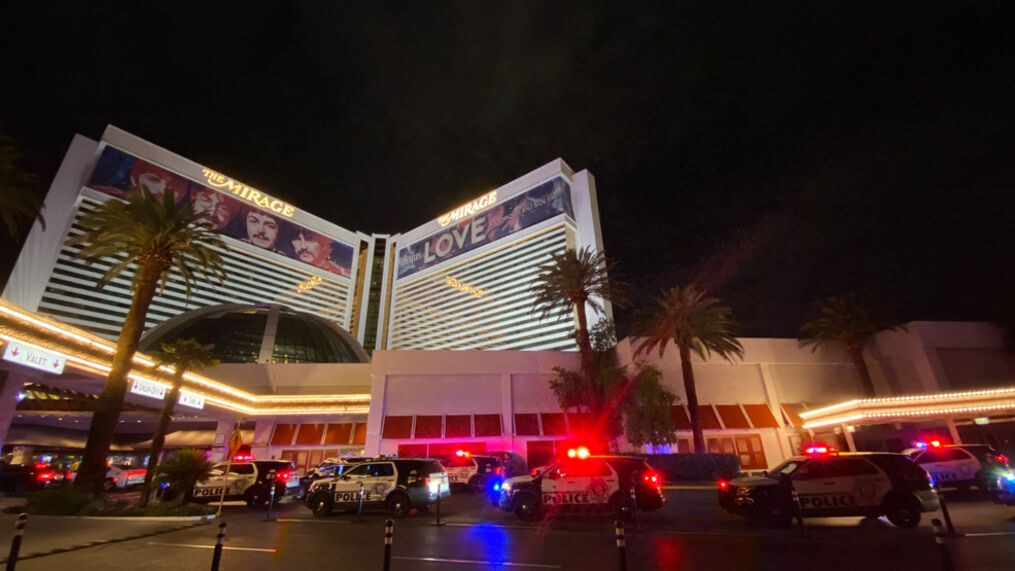 One person was killed and two others critically injured during a Thursday evening shooting in a room at The Mirage hotel. The suspect who shot all three at the iconic Las Vegas Strip property remains on the loose, police revealed.

The deceased victim passed away in the room shortly before 8:30 pm. He was believed to be in his 40s or 50s, police said.

The two other injured victims, both women, were rushed to University Medical Center for treatment. They were both in critical condition as of early Friday and likely are receiving life-saving treatment. Both were shot multiple times, police said.

The victims and the shooter knew each other before the shooting, police add.

There are social media reports the Las Vegas Strip property was placed on lockdown. Guests said they were not allowed to leave the venue for hours after the shooting.

In a 1:04 am Friday tweet, Las Vegas Metropolitan Police Department (LVMPD) officers warned the public to avoid the area. But police further advised it was an “isolated” incident, and there was no threat to the general public from the shooter.

There was an altercation that happened in the room between four individuals we believe all known to each other,” LVMPD Capt. Dori Koren told reporters early Friday. “And during that altercation, the one individual shot the three other individuals.”

Koren said the suspect is a black male. He is a bit heavier.

Police did not reveal where they suspect the shooter was now hiding. But it is likely officers searched The Mirage and the neighboring area soon after arriving on the Strip. Koren said that officers are following up on “good” leads.

We have a lot of confidence that we will catch the killer in this case and we will close this investigation as we always do,” Koren added. He directs the LVMPD homicide unit.

Officers said they responded to The Mirage within a minute of getting the first 911 call on the incident. Police and other emergency personnel immediately provided medical aid to the two female victims. The man was already dead.

Police did not say immediately if they know the suspect’s identity. Nor did Koren say what type of weapon was used to shoot the three victims.

Eileen De La Cruz, a guest at The Mirage, told Insider she tried to leave the hotel at about 8 pm Thursday.

“They wouldn’t let us out. We asked what was going on. They said, ‘nothing.’ There was never any announcements asking us to stay in our rooms or anything.”

Also, Saeed Ahmed, who works for NPR, also was at The Mirage Thursday night. He said no one could get to the second through eighth floors. Elevators serving these floors were blocked, he said.

No one’s being let in or out of the main entrance. Officers also went room to room to check if everyone’s ok,” he further revealed on Twitter.

Right now multiple authorities are responding to a reported shooting at the Mirage on the Las Vegas Strip with reports of multiple victims shot the hotel is on Lockdown pic.twitter.com/wO4oCRY0yA

By 11 pm, yellow police tape in front of The Mirage was getting removed, KLAS, a local TV station, reported. Guests were let back into the hotel by 10:50 pm, KLAS added.

It is likely police will review footage from the numerous surveillance cameras at The Mirage and nearby hotels. Investigators also searched the hotel for physical evidence and any possible witnesses.

Police were working “hand in hand” with security officers at The Mirage Thursday night, Koren said, adding that makes this “a very effective investigation.”

LVMPD’s relationship with security forces at casinos along the Strip have been “remarkable,” he said.

But one social media poster, Phil Paule, said on Vital Vegas, “Is it me, or was Vegas safer when the Mob ran it?”

Both the Las Vegas Strip and the Fremont Street area have seen violent crimes in recent months and years. Metro police have upped selective enforcement efforts to combat shootings and similar crimes. Examples are the two Operation Persistent Pressure initiatives and the current upped security in Downtown Las Vegas.

“These types of incidents, these types of extreme violence that happen in our city, we take very seriously,” Koren told the media.

“You’ve seen it with all the investigations we conduct,” Koren added. “We’re fortunate to have the best homicide investigative unit in the country with the highest clearance rates for a reason. So, we’re confident we will solve this case.”