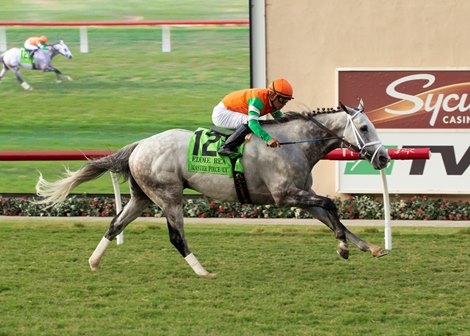 Master Piece  pulled a couple of Rich Strike -like moves in the $252,500 Eddie Read Stakes (G2T) July 31 at Del Mar. He scratched in off of the also-eligible list, putting him in the outside post position, and then he came from far back off a lively pace for the victory.

The Eddie Read didn’t have nearly as big a field as Rich Strike contended with in this year’s Kentucky Derby presented by Woodford Reserve (G1) when he scratched in and came from far back. But Del Mar has a quick bend out of the chute for a 1 1/8-mile turf race, and Master Piece and jockey Abel Cedillo negotiated the trip well.

When the gate opened, Masteroffoxhounds  on the rail took the lead, followed quickly by favored Beyond Brilliant . Master Piece, the #12 horse but coming out of post 10 with two scratches, veered inward as Homer Screen , the #8 horse, veered out. Hong Kong Harry  and Cathkin Peak , both trained by Phil D’Amato, were caught between those two, later prompting D’Amato to lodge an objection, though the stewards made no change.

“I don’t think a lot happened at the start,” said Cedillo. “I just brushed the horse alongside me.”

Masteroffoxhounds, also trained by D’Amato, and Beyond Brilliant vied for the early advantage, traveling the first quarter-mile in :23.24. They opened up about five lengths on the rest of the field going down the backstretch. Beyond Brilliant then took command by about a length heading to the far turn, but Masteroffoxhounds came back on and those two were joined on the outside by Tango Tango Tango .

Cedillo had settled Master Piece into seventh early. They saved ground, and Master Piece skimmed the rail rounding the bend. Then at the top of the stretch, Cedillo was able to angle Master Piece out into the three path.

“At the three-eighths pole, I got lucky,” said Cedillo. “I had to go between two horses, and it was there for me. Then he was really running late.”

Master Piece charged to the lead outside of Beyond Brilliant and Masteroffoxhounds, swooping by those two and scoring by 3 1/2 lengths in a final time of 1:46.25. He paid $34.20 to win.

“He’s fresh and a happy horse down here (at Del Mar),” said McCarthy. “I was surprised at the move he put in. I knew he would run well. I told Abel he would be rolling late, but that was pretty impressive the last quarter of a mile.”

Several others came on late, resulting in five horses battling for second. Hong Kong Harry nabbed the place by a half-length, with Cathkin Peak third.

Michael McCarthy trains Master Piece for owners Fernando Diaz-Valdes, Baalbek Corp, and Don Alberto Stable. McCarthy also trains There Goes Harvard , who was scratched from the Eddie Read and ran instead in the previous day’s San Diego Stakes (G2). There Goes Harvard had a troubled trip and finished last.

Master Piece was getting his first victory since winning an allowance race at Keeneland in April 2021 when trained by Chad Brown. McCarthy took over last summer, and Master Piece in his first start for McCarthy finished second in the Del Mar Handicap presented by the Japan Racing Association (G2T) to Astronaut.