Lukas Brings Naughty Gal From KY to Spa for Adirondack 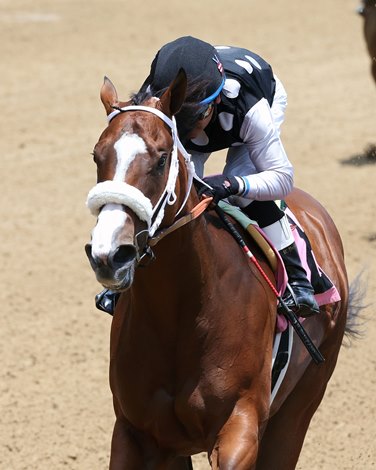 When Hall of Fame trainer D. Wayne Lukas loaded up the horse van in Kentucky and pointed it toward Saratoga Race Course, the truck had some precious cargo.

She keeps 86-year-old Lukas spry and young. But what really gets him ready to roll are the babies. Throughout his long and illustrious career, he has had the magic touch with the youngsters.

And, here he comes again. Lukas is set to unleash another one on Saratoga in Naughty Gal , owned by Holy Cow Stable. She’ll run in the Aug. 7 $200,000 Adirondack (G2), the second of three stakes races for 2-year-old fillies.

“I don’t know how many times I’ve won it,” Lukas said, sitting behind his desk in his barn office at the Oklahoma Training Track. “More than once.”

Certainly more than once. Lukas has won the Adirondack a record six times, including four straight years: 1985-88.

Naughty Gal, a daughter of Into Mischief  —Conway Two Step  by Spanish Steps , was bred in Florida and purchased for $350,000 at the 2022 Ocala Breeders’ Sales Company March Sale of 2-year-olds in Training.

In her second career start, July 4 at Churchill Downs, Naughty Gal mowed down 10 rivals and to win by 9 1/4 lengths. It could have been more.

“She was just cruising,” Lukas said.

When the Spa meet opened July 14, Lukas ran 6-5 favorite Summer Promise  in the Schuylerville (G3) for 2-year-old fillies. She finished second. Lukas was high on Summer Promise; he has the same vibe about Naughty Gal.

Naughty Gal will be ridden by Luis Saez and will start from post position two in the 6 1/2 furlong race.

“You know you have a good one,” Lukas said about 2-year-olds. “The one thing about 2-year-old racing is it’s like the NCAA Tournament. Everyone comes from different regions and you don’t have any idea. You think you have a nice filly and you drop in here and there might be a world beater and you won’t even be aware of it.”

Only one Adirondack runner competed in the Schuylerville, that being Gary Barber’s Janis Joplin , who finished third after a slow start. Trained by Mark Casse, the daughter of California Chrome  also finished third in her first start, at Churchill Downs on June 29.

“I thought it was decent,” Casse said of Janis Joplin’s effort in the Schuylerville. “She will get better as she goes longer. She has room for improvement, that’s for sure.”

The other four horses in the race are Michael Dubb’sApple Picker , a daughter of Cairo Prince  , who broke her maiden by four lengths at Belmont Park on July 2 for trainer Rudy Rodriguez; J S Stables’ Promise of Hope , by Ghostzapper  , and a 3 1/2-length winner in her first start at Churchill Downs July 1 for trainer Tom Amoss; Valene Farms’ Sabra Tuff , a daughter of Cross Traffic   who was last seen finishing second in the Debutante Stakes at Churchill July 4 for trainer Dallas Stewart and Perrine Time Thoroughbreds’ Damaso , by Outwork  , who was third in the My Dear Stakes at Woodbine July 16 for trainer Timothy Hamm.