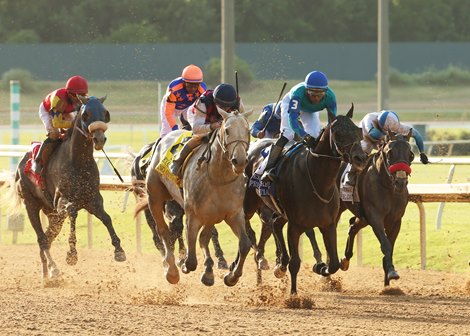 Lone Star Park canceled racing July 14-15 because jockeys there are concerned they will not receive prompt off-track medical treatment from providers if they are injured during racing, according to Terry Meyocks, president and CEO of the Jockeys’ Guild. A jockeys’ decision led to the cancellation Thursday, while the track decided to cancel Friday evening, Meyocks said.

“What they offered, I think is going to work out OK, but unfortunately, today they ran out of time,” veteran jockey Stewart Elliott Friday afternoon. “(Management) didn’t want the horsemen to medicate the horses and everything, which was a good idea. So they canceled tonight, but they said they would be working on this all night to try to get something resolved for early post tomorrow, 11 o’clock. Hopefully it gets resolved tonight.”

The Texas track, operated by Global Gaming Solutions, has a $1 million on-track insurance policy for injured jockeys, Meyocks said, but that a rider injured there July 4, Carlos Montalvo, had not been able to secure until late this week an appointment with a specialist to get treated for three to four injuries.

The on-track accident policy, underwritten by Chubb and purchased through John Unick’s Insurance Office of America, is the “exact policy” in place at many other U.S. racetracks, Unick told BloodHorse.

“It seems to be a regional situation in Dallas-Fort Worth,” Unick said. “I don’t know what’s causing it, but the medical providers in the Dallas-Fort Worth area are all of a sudden uniting and being difficult insurance-wise.”

Frustrations related to obtaining pre-authorization and pre-clearance to see specialists appear to be involved, Unick added.

“We don’t know what it is,” Elliott said of the challenges of lining up a medical specialist. “All we know as jockeys is that we need to know that we’re okay before we go out there and risk our lives.”

Meyocks said jockeys met with Lone Star Park management late Thursday afternoon and did not receive what they felt were adequate assurances that they could receive immediate treatment.

“It’s not what Lone Star did wrong or the insurance company,” Meyocks said Friday. “It’s the system that maybe is broken. It’s unfortunate.”

“It’s being addressed at the highest level, and Carlos, as any jockey, will be taken care of properly,” Unick said. “Our reputation means everything with taking care of jockeys. He’s in the best of care, but the system sometimes needs to be ironed out.”

Lone Star Park is scheduled to stage the $300,00 Texas Turf Classic July 16 and three supporting stakes worth $150,000 apiece during one of its top racing days of his ongoing season. The meet runs through July 24.