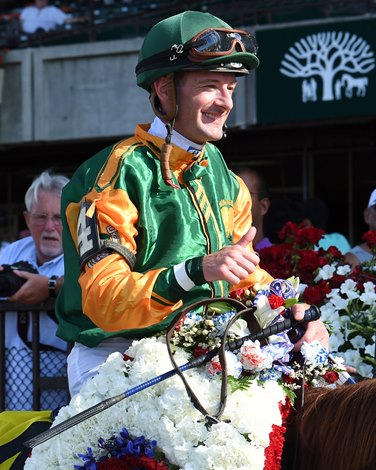 Leparoux, based this summer at Saratoga Race Course, was chosen by a committee comprised of members of the Venezia family, representatives of the Jockeys’ Guild, and retired Eclipse Award-winning jockey Richard Migliore. Leparoux will be recognized in a winner’s circle ceremony at Saratoga Race Course on Friday, Aug.12.

The Mike Venezia Memorial Award is presented annually to a jockey who displays the extraordinary sportsmanship and citizenship that personified Venezia, who died as the result of injuries suffered in a spill in 1988. Venezia, a native of Brooklyn, N.Y., won more than 2,300 races during his 25-year career.

“Julien is richly deserving of this honor as a great professional both on and off the track,” said Terry Meyocks, president and chief executive officer of the Jockeys’ Guild. “For years, he has represented our sport with distinction. We welcome him to the ranks of distinguished riders who have previously won the Venezia Award.”

A native of Senlis, France, and the son of the late jockey-turned-trainer Robert Leparoux, Julien Leparoux, 39, has risen to prominence since making his debut as a jockey in 2005 at Saratoga. Leparoux won the Eclipse Award as the outstanding apprentice jockey of 2006, when he led the U.S. with 403 victories. He then earned a second Eclipse Award in 2009 as the year’s outstanding jockey, making him one of only four jockeys to receive an Eclipse as an apprentice and journeyman.

During his career, Leparoux has amassed 2,880 wins and more than $183 million in prize earnings. Those victories include seven Breeders’ Cup races, among them the 2015 Breeders’ Cup Mile (G1T) aboard champion turf mare Tepin, and the 2016 Sentient Jet Breeders’ Cup Juvenile (G1) on Classic Empire. At the 2009 Breeders’ Cup, Leparoux won the Shoemaker Award as the winningest jockey with three wins.

For Migliore, the 2003 Venezia Memorial Award winner who is now with NYRA TV, the award carries on the legacy of Venezia.

“Thanks to NYRA, the Venezia Award continues to honor Mike’s life and legacy as well as the entire Venezia family,” said Migliore. “On behalf of the past winners of this prestigious award, I congratulate Julien on this richly deserved honor.”