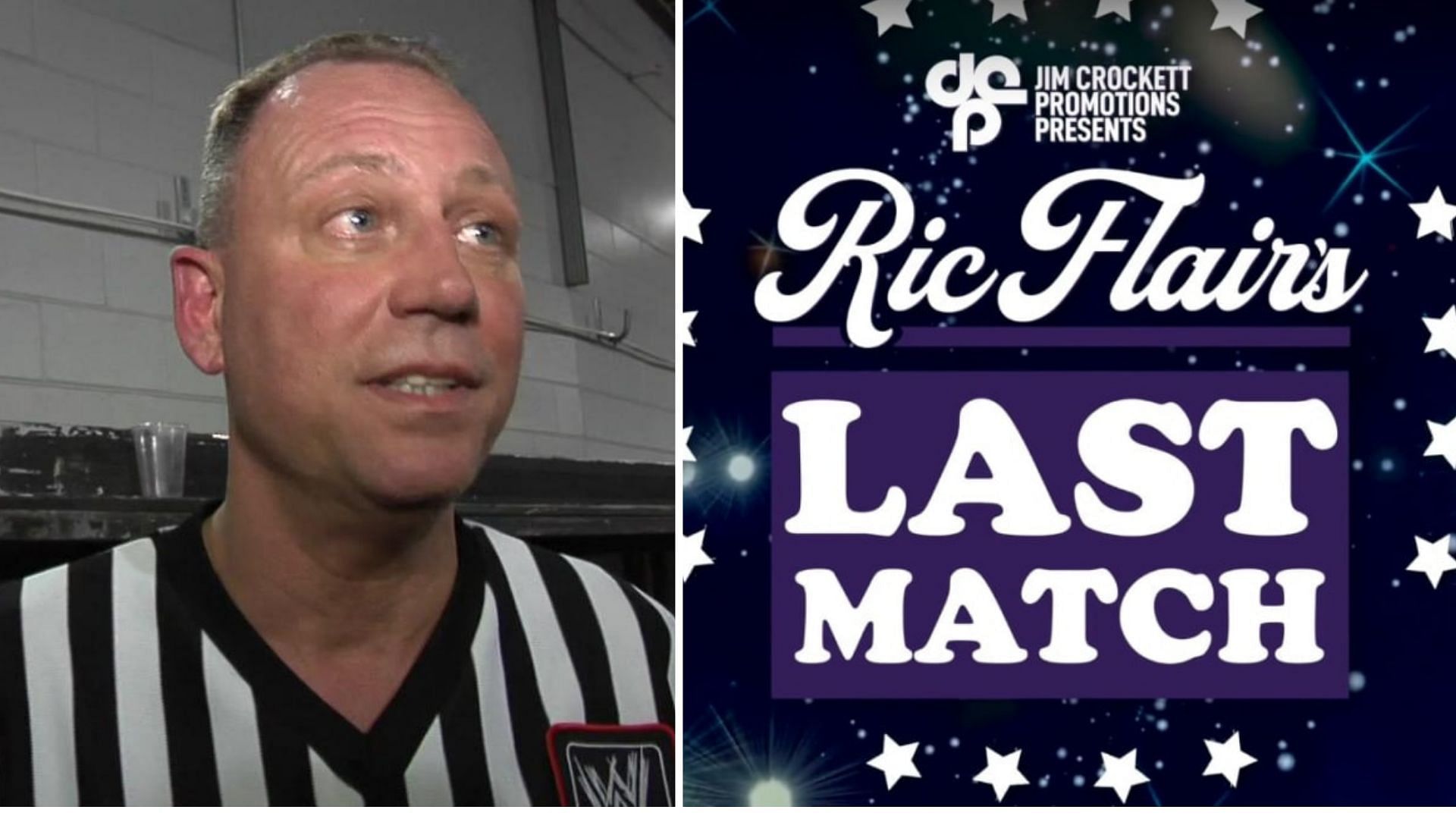 Legendary referee Mike Chioda, who has been in the wrestling business for 33 years, has revealed how he ended up being the referee for the main event of Ric Flair‘s Last Match. The event is headlined by The Nature Boy teaming up with Andrade El Idolo to take on Jeff Jarrett and Jay Lethal.

Chioda spent 21 years in WWE before being released in 2020. During his time in the Stamford-based promotion, he officiated some of the most iconic matches in pro wrestling history, including Shawn Michaels vs. “Stone Cold” Steve Austin at WrestleMania 14, The Rock vs. Hulk Hogan at WrestleMania 18, and John Cena vs. The Rock at WrestleMania 28.

Since his release, he has spent time with AEW, where he has been the official of some big matches like Cody Rhodes vs. Darby Allen for the TNT Title at Full Gear 2020, and the Owen Hart Tournament final between Adam Cole and Samoa Joe.

Chioda recently appeared on IHeartRADIO’s Battleground Podcast, where he revealed how he came to be the referee for Ric Flair’s final match:

“Conrad Thompson texted me. I know he’s family. He reached out to me… He asked me to do this match and it was an honor to be asked and a great feeling. ‘Wow, Ric wants to do it one more time.” (H/T: EWrestlingNews)

The Ric Flair’s Last Match pay-per-view is part of Starrcast V and will emanate live today from the Nashville Auditorium in Nashville, TN. The show is in the same city as WWE’s SummerSlam and on the same weekend as the Biggest Party of the Summer.

During the same appearance, Mike Chioda shared his appreciation for how athletic and agile Ric Flair is for his age (73). The former WWE referee wondered if he would have the same energy at that age:

“I follow him on social media and saw him about eight months ago at another event. He’s got more spunk at 73. I’m 55 and I’m thinking, ‘Am I going to have that energy in 18 more years?’ On the boat, drinking a beer or two, fishing, hanging out,” said Chioda. (H/T: EWrestlingNews)

The only looks general audiences have into Ric’s fitness are some videos he posted of himself sparring with Jay Lethal on Twitter. This was in May this year, before it was even announced that the 16-time World Champion would step into the squared-circle once more.

Like I Said- It’s All About The Fundamentals. If You Can’t Punch, You Can’t Kick, You Can’t Work! WOOOOO! @TheLethalJay

Like I Said- It’s All About The Fundamentals. If You Can’t Punch, You Can’t Kick, You Can’t Work! WOOOOO! @TheLethalJay https://t.co/1DxzGvQHab

While it doesn’t seem possible that Ric Flair is in shape to put on a classic match, he does look agile enough for two younger wrestlers in Andrade and Lethal – along with Jeff Jarrett, who can hold his own – to carry him to a decent enough spectacle.