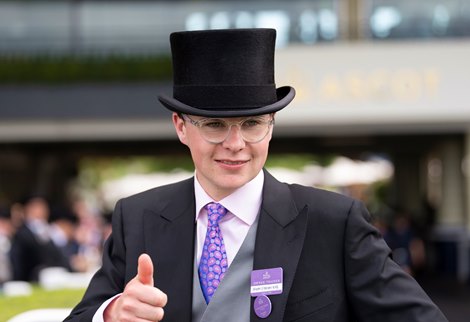 Alexis Zorba has finished second in his two prior efforts in Ireland, both times finishing behind an eventual group stakes winner for Joseph’s father, trainer Aidan O’Brien. He was beaten 1 1/2 lengths on debut April 8 over the all-weather surface at Dundalk in a race won by Blackbeard , who went on to capture the Gain Marble Hill (G3) at The Curragh and the Darley Prix Robert Papin (G2) at Chantilly.

In his second start, Alexis Zorba finished three lengths behind Little Big Bear , who came back to defeat a 24-horse field in the Windsor Castle at Royal Ascot before capturing the Jebel Ali Racecourse and Stables Anglesey Stakes (G3) July 16 at The Curragh.

“He’s in good shape,” O’Brien said. “He’s had two runs in Ireland that obviously the form worked out well. The track is a question mark for him. It’s fantastic to have some horses for Peter. We’re hopeful that this will be a nice colt.”

Alexis Zorba, bred in Great Britain by Plantation Stud, is by Australian-bred Zoustar  and out of the Exceed and Excel  mare Rue Cambon—a half sister to grade 1-winning millionaire Gorella. She was purchased by Brant’s White Birch Farm and bloodstock agent Demi O’Byrne for $442,516 at the 2021 Tattersalls October Yearling Sale.

Hall of Fame rider John Velazquez will pick up the mount aboard Alexis Zorba from post 4 as the 9-5 morning line favorite.

O’Brien will try to double up on juvenile turf maiden victories this week when sending out Reckoning Force in a 1 1/16-mile maiden special weight in the Saturday opener.

In his lone effort, Reckoning Force was third, beaten 1 3/4 lengths in a six-furlong maiden event June 4 at Listowel.

“He’s placed in his only run and we’re hoping he can run well,” O’Brien said.

O’Brien, who has stalls at Saratoga for the first time, has enjoyed past success when shipping to the Spa, including last year when saddling State of Rest  to a victory in the Saratoga Derby Invitational (G1T) en route to group 1 victories in Australia, France, and England.

“Obviously, there’s some great prize money to be won up there and I have some owners that were interested and love to compete there,” O’Brien said.