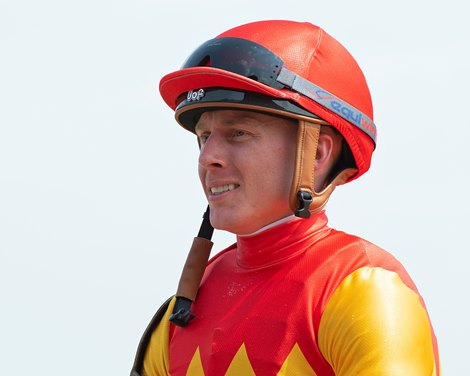 Jockey Dylan Davis received a seven-day suspension Aug. 12 for his ride in the Aug. 10 seventh race at Saratoga Race Course that resulted in another horse falling during the 5 1/2-furlong turf sprint.

Davis, who did not appeal the suspension, will miss the Aug. 17 through Aug. 25 cards.

While riding Montatham  in the Aug. 10 race, approaching the quarter pole, Davis’ mount swung out in front of On Our Way Boyz , shutting him off. On Our Way Boyz then clipped heels with Montatham and fell, unseating jockey Eric Cancel.

Neither Cancel nor his mount were seriously injured.

Though Montatham’s rally carried him across the finish line first, the son of Candy Ride   was disqualified due to the incident and placed last.

The award honors the memory of Venezia, who died in a 1988 spill at Belmont Park, and recognizes the extraordinary sportsmanship and citizenship that personified Venezia, a winner of more than 2,300 races during his 25 years as a mainstay of the New York riding colony.

“I am very thankful to everyone for this award and very proud of it,” Leparoux said.