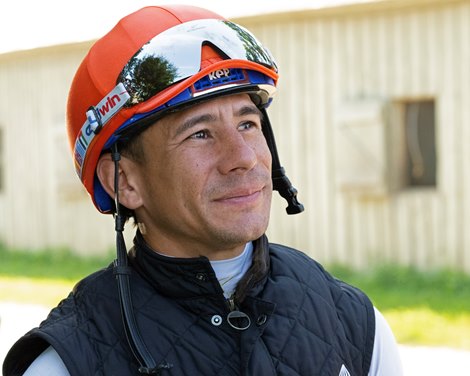 Junior Alvarado has tasted Whitney victory before. The 36-year-old jockey won the Whitney Stakes (G1) in 2014 with Moreno.

He’ll try for another trip to the winner’s circle at Saratoga Race Course following the when he rides the formidable Olympiad  in the 95th running of the prestigious $1 million race on Aug. 6. Olympiad, a 4-year-old son ofSpeightstown   is the 2-1 morning line second choice in the six-horse field. Life Is Good is the 6-5 morning line favorite.

Olympiad has won all five of his starts this year, four of them graded stakes races. Alvarado has been the pilot in all of them.

“It’s amazing how, after each race, he has become more of a real man,” Alvarado said. “He improves every time out.”

Alvarado rode Olympiad in his first two starts when he debuted as a 2-year-old at Saratoga in 2020. The first time he ran, on Aug. 1, Olympiad finished third.

“I knew he was pretty good the first time I rode him,” Alvarado said. “After that race, I told Bill Hall of Fame trainer Mott) that I thought this guy was going to be the real deal.”

Olympiad needed some time during his 3-year-old season and raced just three times, the first one coming in September. Alvarado missed two of those three races, including a fourth in the Cigar Mile Presented by NYRA Bets (G1) at Aqueduct Racetrack on Dec. 4.

After that, Alvarado decided he wasn’t going to miss a ride on this horse again.

“I had to keep this mount,” Alvarado said. “I never stopped asking about him.”

Olympiad has won his five starts this year by a combined 16 1/4 lengths. In his most recent start, he won the Stephen Foster Stakes (G2) at Churchill Downs by 2 1/4 lengths.

Now comes the biggest test of his career. Alvarado can’t wait for the opportunity

“Definitely,” Alvarado said. “Winning the Whitney again would be very satisfying for me and my career.”