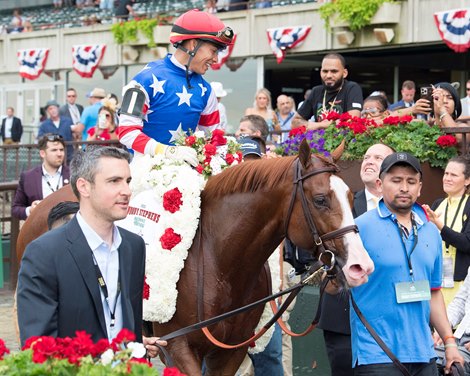 Jack Christopher  returned to the work tab Aug. 6 at Saratoga Race Course, his first move since a third in the July 23 TVG.com Haskell Stakes (G1) at Monmouth Park.

On the main track with jockey Jose Ortiz in the irons, the Chad Brown-trained son of Munnings   was clocked through four furlongs in :50 1/5. He is targeting the Aug. 27 H. Allen Jerkens Memorial Stakes (G1), a seven-furlong sprint at The Spa that will see him cut back in distance off the 1 1/8-mile Haskell.

“He just had his first work back; he went a little slow,” Brown said. “There was some traffic in the lane there and (Ortiz) kind of had to take ahold of him unfortunately. I know I breezed him on a busy part of the day. He got through it and he galloped out fine. It’s his first little piece of work; he’ll do a lot more next week.”

Owned by Jim Bakke, Gerald Isbister, Coolmore Stud, and Peter Brant, Jack Christopher won the 2021 Champagne Stakes (G1) at Belmont Park off a debut maiden score at Saratoga. He returned in 2022 after missing the Breeders’ Cup Juvenile (G1) with a shin issue with two straight wins: the May 7 Pat Day Mile Stakes Presented by LG&E and KU (G2) at Churchill Downs and the June 11 Woody Stephen Stakes Presented by Mohegan Sun (G1) at Belmont Park.