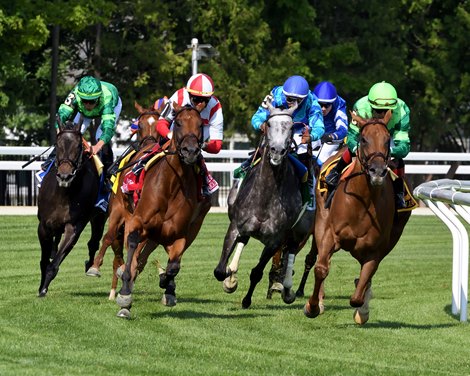 Up in his clubhouse box seat, Peter Brant, the owner of In Italian, took a glimpse at those splits and thought this:

Brant changed his mind on his gutsy filly as he watched her and Joel Rosario never relinquish the lead despite setting the swift fractions in the 1 1/8-mile race over the firm course.

When the running was done, In Italian had checked plenty of boxes for Brant and trainer Chad Brown.

It also gave Brown his seventh win in the first grade 1 of the Saratoga summer. No one has won more in the 84 editions of the race.

In the winner’s circle, Brown, as is his style, refused to take the credit. He deflected any praise to his staff, as he always does after a big win.

“It’s not just the right thing to say, it’s the truth,” Brown said. “When you are the lead singer in the band, you will have the tomatoes thrown at you, and you are the first one to get the applause. When you train hundreds of horses and you have hundreds of employees—that I call teammates—it’s a lot of work.”

In Italian, a daughter of Dubawi –Florentina  by Redoute’s Choice ,  was deserving of some bows, too. Brown had four of the six horses that ran in the Diana and In Italian was the longest price, at 8-1.

Brown completed the personal superfecta as Technical Analysis (7-2) was second, Bleecker Street  (4-5) was third and Rougir  (7-2) fourth. Dalika  (28-1) and Creative Flair  (9-1) completed the order of finish.

“Chad Brown is an excellent, excellent trainer,” said Brant, who also owns Bleecker Street and co-owns Rougir. “Historically, he is as good as any of the great trainers. He prepares these grass horses really well.”

“He has the best fillies in America,” said Jose Ortiz, who rode Technical Analysis. “He is loaded.”

In Italian was 1 1/2 lengths in front of Technical Analysis, who proved to be the only threat on this day. After those quick fractions, In Italian, who started from post position six, covered six furlongs in 1:09.50. If anyone was waiting for her to cave in, they were going to have a long wait.

“She was just going very easy and enjoying everything,” Rosario said. “It looked like she had the speed on paper. Chad told me to let her break and go into the first turn, and she was forwardly placed.”

Around the far turn, Technical Analysis, a daughter of Kingman , made her move and, for a brief moment, it looked like she might run past the leader.

“At the top of the stretch and I got out, yeah,” Ortiz said. “Then (In Italian) rebroke and that was it. The winner freaked out. We got beat by a horse that ran very hard and went fast early and rebroke. That’s very hard to do, but In Italian did it.”

Brown has always had a special spot in his heart for the Diana. The first one he won—in 2011 with Zagora—was the first grade 1 of his career. He came into this edition loaded with the late-running Bleecker Street, who was unbeaten in seven starts, Rougir, and Technical Analysis.

In the end, the standout was the fourth 4-year-old of the bunch, who was not as hyped as her stablemates.

In Italian finished third in her last start, the June 11 Longines Just a Game Stakes (G1T) at Belmont Park.

This was her first grade 1 win. She has not missed the board in seven starts.

“She ran the race of her life,” Brown said. “I am just so lucky to have so many great horses in this division. In Italian has been holding as high company in the mornings as you can, as she has been working with Regal Glory . She’s been the lead horse in the works for Regal Glory two or three weeks in a row at Belmont. I’ve been so impressed with her not letting Regal Glory by her, who I regard as the top mare in the division. She ran (to) her work today.”

In Italian and her connections celebrate the Diana victory