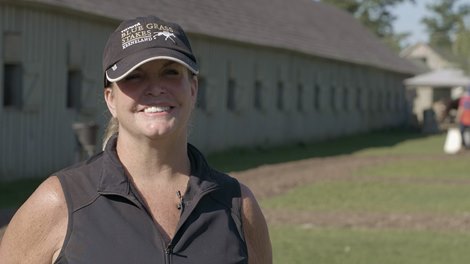 Winning the last race at Saratoga Race Course Aug. 3 brought smiles and high-fives from the small entourage that greeted Cathedral Beach , owned by Thoroughbred Acquisition Group, in the winner’s circle. Most of the crowd of 25,596 had long since departed on the hot and humid summer Spa day.

The biggest grin belonged to trainer George Weaver, who has been riding an emotional roller coaster the last month. The 51-year-old native of Louisville, Ky., has been training his horses all spring and summer at Saratoga Race Course, but his thoughts have been elsewhere.

They have been with his best friend, his wife, Cindy Hutter, an accomplished horsewoman, who, besides being an assistant to her husband, is also an exercise rider for the barn.

Hutter is at Spaulding Rehabilitation Hospital in Boston recovering from a serious brain injury sustained while exercising a horse from the barn on the Oklahoma Training Track July 3.

In the last month Weaver has experienced more lows than highs. The only thing he wants is for his wife to get better.

There have been signs that is beginning to happen.

“She had a good week last week,” Weaver said, accepting well wishes and support from those he knew and those he didn’t in the Spa clubhouse. “She is making improvements. She would want us to come out here and win races and hold the fort down. So that is what we are doing.”

Hutter was transferred to the Boston hospital nearly two weeks ago from Albany Medical Center, where she initially was treated after the accident.

Weaver said his wife has been awake and has been working tirelessly on her rehabilitation.

“She is a tough girl,” Weaver said. “But she has a job to do, too. They are working her pretty hard with the physical therapy, and when she’s done with that, she’s pretty tired. She is just now coming around.”

Weaver and his son, Ben, have spent time with Hutter in Boston. It’s hard not being there every day but there is a barn to run. His wife would expect nothing less. Other family members and friends have also been with Hutter as she continues her rehab.

When the injury first occurred, Hutter, 57, remained unconscious for a few weeks before coming out of it. The process has been slow. It has been frustrating. It has been frightening.

The accident occurred when Hutter was galloping a 3-year-old filly named Vindatude  when the horse suddenly collapsed and died. When the horse fell, she pinned Hutter underneath her. Weaver also owned and bred the Mshawish   filly.

“You know, we really didn’t know what to expect,” Weaver said. “It’s very scary when you start reading about head injuries. There is really nothing guaranteed and there is still nothing guaranteed. But she knows who we are. She talks to us and she is doing physical therapy. Right now, we are happy with the way things are going.”

The ultimate goal is when Weaver and his son can bring their wife and mother home.

“We are looking forward to that,” Weaver said. “It will probably be awhile. She has a long way to go, but the last week has been real good.”