Gunite Holds Off Accretive by a Neck in Amsterdam 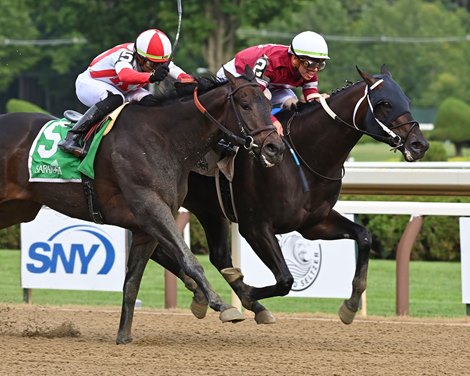 It turned out to be a rather rewarding weekend at Saratoga Race Course for owner Ron Winchell and trainer Steve Asmussen.

Not only did they win a pair of grade 2 stakes that could arguably fit the bill as grade 1 tests, when all was said and done they came away with two 3-year-olds who could play a big role in a pair of grade 1 stakes on the biggest weekend of the meet.


GUNITE IS BACK!!! He battles it out in the G2 Amsterdam with @Tyler_Gaff for Steve Asmussen #Saratoga pic.twitter.com/UUZo3BY9Af

A day after Winchell Thoroughbreds’ Epicenter  won the July 30  Jim Dandy Stakes (G2) at the Spa to become the favorite for the Aug. 27 Runhappy Travers Stakes (G1), stablemate Gunite  presented evidence that he will be a major player in the seven-furlong H. Allen Jerkens Memorial (G1) on the same day by holding on and outdueling Klaravich Stables’ Accretive  by a neck in the $200,000 Amsterdam Stakes (G2) for 3-year-olds at Saratoga.

“It was an alright weekend,” Winchell said with a chuckle. “A little icing on the cake after yesterday. (Gunite) is a homebred, a (son of) Gun Runner  , that’s the way you want to get it done.”

The same, though, could not be said for Speedway Stables’ 2021 undefeated 2-year-old champion Corniche , whose 3-year-old debut and first start for trainer Todd Pletcher produced a dismal last-place finish as the 8-5 favorite in the field of nine, about 33 lengths behind Gunite.

“He didn’t get away cleanly and found himself in a position he’s never been in before,” Pletcher said about the usually speedy son of Quality Road   who was 3-for-3 capped by a Nov. 5 TVG Breeders’ Cup Juvenile Presented by Thoroughbred Aftercare Alliance (G1) victory for trainer Bob Baffert. “(Jockey Luis Saez) said when he came to the three-eighths pole, he kind of came off the bridle. We’ll scope him and see if anything is revealed, but it’s disappointing.”

Like Corniche, Gunite was a grade 1 winner at 2 and the July 31 Amsterdam at 6 1/2 furlongs brought him back to the scene of his biggest triumph, a 5 3/4-length score in last year’s Hopeful Stakes (G1). The grit the homebred son of the Cowboy Cal  mare Simple Surprise showed in fending off Accretive in a lively stretch duel also reminded Asmussen of what he saw prior to the Hopeful when the colt dueled through fast fractions for the early lead in the Saratoga Special Presented by Miller Lite (G2) and still hung on for second.

“Last year, going back to the Saratoga Special when he was second, what a value race it was for a 2-year-old. I mean he was on the bridle at the half-mile pole and stayed on hard to be second. He’s tough. He really is. It was a grinding race today and hopefully we’re sharper for the Jerkens,” said Asmussen, who won a third straight Amsterdam after taking the last two editions with Jackie’s Warrior  and Yaupon   and posted his sixth win in the sprint stakes since 2004.

After a fifth in the Champagne Stakes (G1) ended Gunite’s 2-year-old campaign, the focus fell on sprinting at 3. He opened 2022 with a second in a June 3 seven-furlong allowance race at Churchill Downs and then won the Maxfield Overnight Stakes, also at seven furlongs.

“Working him with (2-year-old filly champ) Echo Zulu  showed us he was a sprinter,” Asmussen said.

Like his two previous starts at Saratoga, Gunite flashed early speed in the Amsterdam, battling for the lead with Pinehurst , who was also making his first start away from Baffert as the Hall of Fame trainer serves a suspension at New York Racing Association tracks until late January.

After a half-mile in :44.60, grade 1 winner Pinehurst dropped back to eighth and Accretive charged into contention to join Gunite in a battle to the wire.

Accretive, coming off a debut win for trainer Chad Brown, moved to within a half-length of Gunite in mid-stretch but the inexperienced colt could not get by him as they finished in 1:15.75.

“I think it’s going to set him up nicely (for the rest of the season),” winning jockey Tyler Gaffalione said. “Steve said he’s much bigger and stronger this year and from the two races I’ve seen, he just keeps improving.”

Accretive, a son of Practical Joke  , was 4 1/4-lengths ahead of The Estate of Scott Zimmerman’s Runninsonofagun , a Gun Runner gelding who rallied from eighth to take third at long 56-1 odds for trainer Dallas Stewart.

“My horse ran a huge race,” said Irad Ortiz Jr., who rode Accretive, the 5-2 second choice. “It’s a big jump up and a huge improvement.”