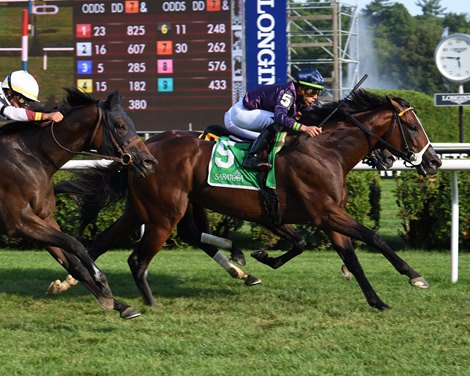 None of the crowd of 26,834 that remained at the Spa thought that Golden Pal , the best male turf sprinter in the country, was going to have a tussle in the 5 1/2-furlong race, his specialty distance.


GOLDEN PAL by a nose in the Troy Stakes (G3) with @iradortiz up! #Saratoga pic.twitter.com/JXGpLR5fM2

That’s what happened as the 4-year-old colt, owned by Mrs. John Magnier, Michael B. Tabor, Derrick Smith, and Westerberg, had to battle the length of the stretch before prevailing by a head over the stubborn True Valour  over the firm Mellon turf course.

“You’re always concerned,” winning trainer Wesley Ward said in the winner’s circle. “But I have a lot of confidence in this horse, (he’s) certainly the best horse I have ever had. He is a once in a lifetime horse.”

With the win, Golden Pal, a son of Uncle Mo  —Lady Shipman , by Midshipman  , improved his record to seven wins in 10 starts on the grass. He is a perfect six-for-six at the Troy distance.

Golden Pal’s strength is that he is fast, especially out of the gate.

That did not happen in the Troy, which was Golden Pal’s first start since a horrid 16th in the King’s Stand Stakes (G1) at Royal Ascot June 14.

So, Ortiz went to Plan B.

In recent breezes, Golden Pal has worked covered up behind horses. When it happened in the Troy, it was not something the horse had never experienced.

“I worked him twice and it was no problem in the morning,” Ortiz said. “He relaxed well and finished good, so I wasn’t afraid.”

Although Golden Pal has traditionally rocketed straight to the lead, Ward showed no panic.

“The plan was, unless he broke super sharp, that I’d like him to come from behind,” Ward said. “I’m glad he showed a little versatility. When you get to the Breeders’ Cup (Sprint, G1), there are so many fast horses—14 of them in the race—and you just want to be able to be tactical and not have to be in front. I think he showed that.”

Golden Pal and Irad Ortiz Jr. are led to the winner’s circle after the Troy Stakes

True Valour, owned by R. Larry Johnson and trained by Graham Motion, showed the way, carving out fractions of :21.93 for the first quarter and :44.25 for the half. Golden Pal, racing on the outside, was never far off the leader and Ortiz was confident he would get him. So was Ward.

Feargal Lynch, True Valour’s 44-year-old Maryland-based jockey, was pleasantly surprised when the 1-2 favorite Golden Pal did not strike the lead out of the gate. He was more than happy to inherit it for True Valour, an 8-year-old son of Kodiac .

“When we kicked, I thought we’d won it,” Lynch said. “For an 8-year-old, we’re two old men in the twilight of our career and we’re just enjoying it.”

“We’ll talk it over with everyone involved in the ownership of the horse to see which direction they want to go,” Ward said. “But it’s important to them to show what the horse can do on the dirt as well.”

Thin White Duke , the longest shot on the board at 30-1, finished a neck behind True Valour in third. He was followed home by Arzak , Yes and Yes , Spycraft , and Carotari .