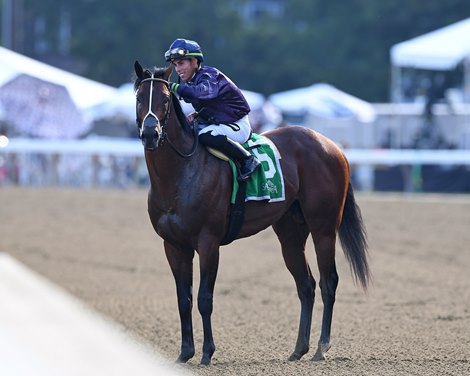 At 8:15 a.m. ET Aug. 6, Golden Pal  was sprawled out on a bed of wood chips in his stall and in a state of Thoroughbred dreamland. The 4-year-old son of Uncle Mo   had earned the rest after winning the $300,000 Troy (G3T) at Saratoga Race Course the day before.

Before long, Golden Pal would be on his feet and playing with trainer Wesley Ward, who was positioned in front of his prized race horse’s stall. Golden Pal, owned by the Coolmore Stud-affliated Mrs. John Magnier, Michael B. Tabor, Derrick Smith and Westerberg Limited, was full of himself after winning the 5 1/2-furlong Troy by a head over True Valour . That was a complete turnaround from the last time he ran, at Royal Ascot on June 14 in the Kings Stand (G1T).

A disastrous start turned into a 16th place finish, the worst in his career. It disappointed Ward and, according to the trainer, made the horse despondent.

First, the tentative plan is a try on the dirt in the $350,000 Stoll Keenon Ogden Phoenix Stakes (G2) at six furlongs Oct. 7 at Keeneland. A victory there would further his eventual appeal to breeders as a stallion.

The colt is scheduled to return to Ward’s base at Keeneland Aug. 7.

The race on the dirt would be just the second in his career. Golden Pal began his career with a second-place finish going 4 1/2 furlongs in April 2020 at Gulfstream Park.

“It’s just purely to showcase him,” Ward said of a possible start in the Phoenix. “We want to show that he can not only attract turf mares, but dirt mares as well.”

After this season, it will be off to the breeding shed for Golden Pal. Ward hopes he ends his racing days with another Breeders’ Cup win and there could also be one start, in Australia, before he departs the barn. When that day comes, it will be a sad day, indeed.

“I tell you, it will be a great loss, but that is racing,” Ward said. “He has really meant a lot to me.”