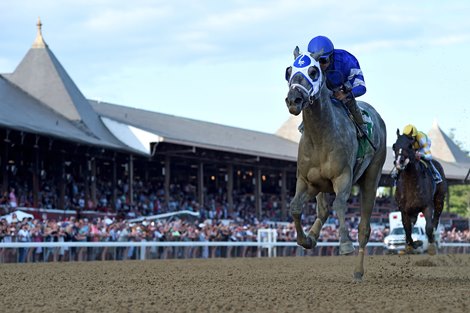 The New York Racing Association, Inc. (NYRA) today announced that FOX Broadcast Network (FOX) will present live coverage and analysis of the Grade 2, $600,000 Jim Dandy on Saturday as part of a 90-minute broadcast, which will begin at 4:30 p.m. ET and include the Grade 1, $350,000 Alfred G. Vanderbilt.

Home of the Grade 1, $1.25 million Runhappy Travers since 2019, FOX acquired the exclusive rights to the Grade 1, $1.5 million Belmont Stakes presented by NYRA Bets in January with coverage to begin in 2023. Saturday’s show will mark the debut of the Jim Dandy on FOX.

The traditional Saratoga prep for the Runhappy Travers, the 59th running of the Jim Dandy is led by a pair of top contenders for four-time Eclipse Award-winning trainer Chad Brown in Early Voting, winner of the Preakness Stakes; and Grade 1 Blue Grass-winner Zandon, who finished third in the Kentucky Derby. Hall of Fame trainer Steve Asmussen will be represented by Epicenter, who was runner-up in both the Kentucky Derby and Preakness.

The Jim Dandy is carded as Race 9 on Saturday, with a scheduled post time of 5:37 p.m.

Asmussen will also send out the reigning Champion Male Sprinter Jackie’s Warrior in search of a third Grade 1 win at the Spa in the Vanderbilt, a six-furlong sprint for 3-year-olds and up.

The Vanderbilt is carded as Race 8 on Saturday, with a scheduled post time of 4:50 p.m.

The Jim Dandy on FOX will incorporate footage provided by a new aerial cable cam system currently in place at Saratoga Race Course. Constructed specifically for the demands of filming thoroughbreds in full flight from a variety of angles, the remote-operated camera travels up to 45 mph along a cable that spans the length of the Saratoga backstretch.

Viewers of the Jim Dandy on FOX will also enjoy an eye-in-the-sky perspective of Saratoga Race Course via a helicopter-mounted SkyCam, which will be utilized throughout the 90-minute show.

In addition to the Jim Dandy on FOX, Saratoga Live will present coverage and analysis on Saturday beginning at 1 p.m. on FS1. For the Saratoga Live broadcast schedule, visit NYRA.com/SaratogaLive.

This press release has not been edited by BloodHorse. If there are any questions please contact the organization that produced the release.