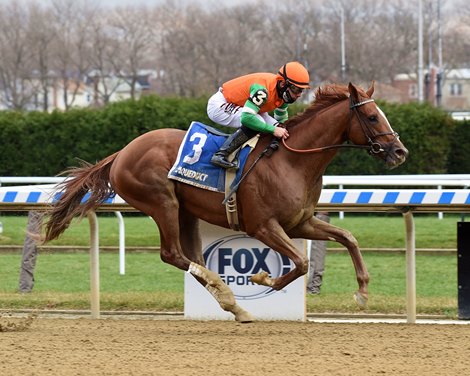 The last time Forza Di Oro  ran, he followed up a third-place finish in the Jockey Club Gold Cup (G1) with a fifth-place showing in the Woodward Stakes (G1) behind Art Collector .

The 87th Iselin Stakes, a “Win and You’re In” race for the Big Ass Fans Breeders’ Cup Dirt Mile (G1), has drawn a field of six, including the Chad Brown-trained Highly Motivated , who won the Monmouth Cup (G3) in his last start.

“He’s done really well since we got him,” said Dan Ward, who oversees Hall of Famer Hollendorfer’s string at Monmouth Park. “He came to us in excellent shape and we’ve taken our time getting him ready. He’s a good-looking horse.”

Forza Di Oro, who won the Discovery Stakes (G3) in 2020, is the mystery horse in the mile and sixteenth race for 3-year-olds and up, with just eight career starts—four victories—and because of the lengthy layoff. But he does have the advantage of leading rider Paco Lopez on Saturday.

“Looking at his form I do see a few bad starts, antsy at the gate, hesitated, dwelt. We’ve taken him to the gate to school him at least 10 times just to make sure that he is behaving well,” said Ward, who has Hollendorfer’s division third in the trainer standings with 20 wins, four behind current leader Claudio Gonzalez. “He’s a good work horse. Every time we’ve worked him Paco has been here to work him. He’s very excited about him. From the first time he worked him he said ‘any time this horse works I’d love to work him.’

“He has done a lot of work helping to get this horse ready.”

Ward is counting on a bit of home track help as well, along with knowing that Forza Di Oro has won twice off lengthy layoffs. He won an allowance at Belmont Park on Oct. 9, 2020, following a 307-day layoff and won an allowance optional claimer at Saratoga Race Course on July 21, 2021, after being idle for 235 days.

Owned by Don Alberto Stable, the Kentucky-bred Forza Di Oro will be making his first start outside of New York. He has banked $329,375 for his career.

“It looks like he can do anything—go to the front or come from behind, two turns, one turn, he runs well off layoffs,” said Ward. “He has a lot of class and he has run against some very good horses.”