Epicenter Has Eyes on the Travers After Jim Dandy Win 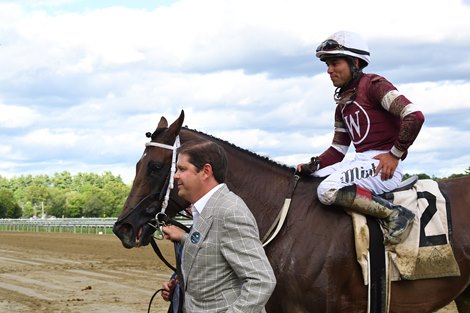 A day after the Jim Dandy Stakes (G2) added some clarity to the 3-year-old picture, little has changed in terms of plans that will take the four starters to either the Aug. 27 Runhappy Travers Stakes (G1) or the Sept. 24 Pennsylvania Derby (G1).

Winchell Thoroughbreds’ Epicenter , who vaulted to the top of the 3-year-old male division via his 1 ½-length victory in the July 30 Jim Dandy at Saratoga Race Course, exited the race fine and will target the 1 1/4-mile Travers, where a victory would almost certainly clinch an Eclipse Award.

“The way he did it was extremely satisfying,” trainer Steve Asmussen said July 31 about the son of Not This Time   who was coming off seconds in the first two legs of the Triple Crown, the Kentucky Derby Presented by Woodford Reserve (G1) and the Preakness Stakes (G1). “I spoke with (owner) Ron Winchell last night and this morning and you saw what we thought was a level of confidence and understanding of what all this racing is about. It looks great going forward.”

“They both came out very well and both horses are very pleased with themselves, bright and alert today,” Asmussen said. “It’s a beautiful morning.”

Trainer Chad Brown sent out Jeff Drown’s Zandon  to a runner-up finish in the Jim Dandy and said the son of Upstart   would target the 1 1/4-mile Travers at the Spa.

“It wasn’t the result we were looking for, but Zandon ran very creditably and got a good trip. Off a 12-week break hopefully he got the race he needed and maybe in a bigger field he could be farther back with a little more pace, which he prefers, and he can move forward (in the Travers),” Brown said about the Toyota Blue Grass Stakes (G1) winner who was making his first start since a third in the May 7 Kentucky Derby.

Brown also trains Preakness winner Early Voting , who set the pace in the Jim Dandy but weakened in the stretch and finished fourth in the small field of four. The four-time Eclipse Award winner will choose between the Travers and the shorter 1 1/8-mile Pennsylvania Derby at Parx Racing for the next start by the Gun Runner   3-year-old.

“Early Voting was the disappointment in that he carved out what looked to be modest fractions and wasn’t able to kick on in the lane. He scoped fine and looks good. The track just wasn’t to his liking and he was quite tired this morning. I’ll observe him and decide on the Travers or the Pennsylvania Derby,” said Brown, who picked up a Travers candidate when Juddmonte’s Artorius  captured the July 29 Curlin Stakes at the Spa.

Trainer Brad Cox also listed the Pennsylvania Derby and Travers as the two choices for Peachtree Stables’ Tawny Port , who was third in the Jim Dandy.

“He was tired this morning, but he deserved to be and had a right to be,” Cox said about the Ohio Derby (G3) winner. “Overall I was happy with his effort and how he looked today. The Pennsylvania Derby is a possibility and maybe the Travers. We’ll make a decision next week.”

“I think he’ll go a mile-and-a-quarter,” Cox said about the Gun Runner colt. “He trained here last year and we’ll breeze him next week. I’m excited about the opportunity.”