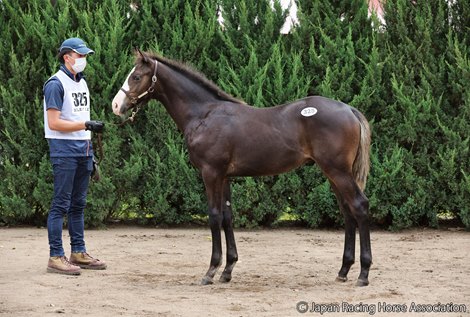 Since Deep Impact and King Kamehameha died in 2019, the stallions’ map in Japan has been in a period of reshuffling. The market on July 12, the foal session of Japan Racing Horse Association Select Sale, suggests the stallion Bricks and Mortar  might be one of those to fulfill the void left by those great sires.

“I visited Northern Farm several times in the last few months and found this (colt) to be improving. That is what I liked about him,” Kuminito said.

“To be frank, I do not know who the next leading sire will be, though, I think Bricks and Mortar is a very suitable stallion for racing in Japan, as he is a turf champion himself and most of his yearlings look like sharp and speedy turf horses,” Kuminito continued.

The 2015 Japanese Derby (G1) winner Duramente  was once regarded as a prime candidate for Japan’s next great sire. Duramente died due to acute colitis in August 2021, and the current foals are unfortunately the members of his final crop.

“I studied her pedigree and am convinced she should have inherited a lot of speed,” Nick Co. racing manager Hiroyasu Takeuchi said.  “She is very valuable as a future broodmare as well, and I believe she is worth paying this amount of money. I thought we might have to pay 300 million yen to buy her and so am happy with this price.”

“It was a record-breaking market here last year, and I did not expect to beat it this year,” said Teruya Yoshida, JRA chairman. “The market was very strong from the top end through bottom end, and I am very impressed with the depth of buyers. There was high demand for young horses that was kept through the two days, and the clearance rate of 95.3% is unbelievable.”