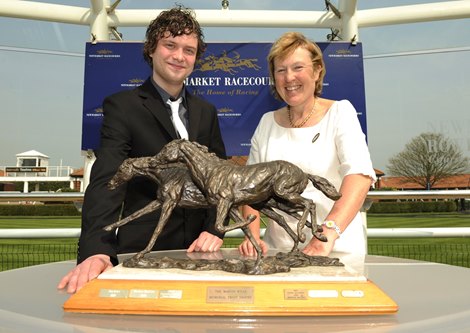 Respected owner/breeder Dr. Catherine Wills, who had horses in training in Britain, France, and the U.S. for more than 25 years, has died at age 71 after a long battle with cancer.

Wills inherited the blue-and-white cross-belted colors of her father, Sir David Wills, who owned the great sprinter Right Boy and One Thousand Guineas winner of 1953 Happy Laughter and died in 1999.

She kept the family breeding operation going by boarding mares at the Kirtlington Stud close to her home in Oxfordshire, as well as in Ireland and the U.S. She bred horses in her own name and in the name of St. Clare Hall Stud.

A member of the Jockey Club, Wills was busy outside racing as an art historian and a trustee of many good causes, including the Sandford St. Martin Trust, the Dulverton Trust, and the HDH Wills Charitable Trust. In addition, she was a trustee of the independent Rendcomb College near Cirencester.

She was also a judge of the Martin Wills Writing Awards, which she set up in memory of her brother. The awards were for aspiring racing writers and ran for 25 years until 2017. Other judges included the Racing Post’s Brough Scott and Lee Mottershead.

Like her father before her, Wills enjoyed much success with Sir Henry Cecil, including listed success with Succinct  in 2002. She had three horses in training with James Fanshawe at the time of her death, including Murau, who proved to be her final winner at Kempton June 1.

Wills also had horses with Fanshawe’s former assistant Kevin Philippart de Foy as well as Nicolas Clement and in the U.S.

Fanshawe said: “The Wills family have been great supporters and suppliers of nice horses for us at Pegasus Stables. Catherine was an extremely enthusiastic owner who will be much missed. We had plenty of winners for her, and the best three were Sir Gerry, Be Mindful, and Selino. She took a real interest in the yard. She really cared about her horses and retired them to her home when their breeding careers had finished.”

The funeral is to be held at St. Martin’s Church at Sandford St. Martin, Oxfordshire Aug. 11 at 11:00 a.m. There will also be a memorial service at Knockando Parish Church, Moray, Scotland, Aug. 22 at 11:00 a.m. Garden flowers only.